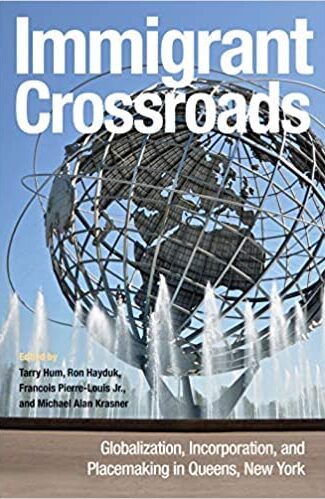 In 1965, the U.S. Congress passed the Hart-Celler Act, eliminating racial quotas enacted in the 1920s and opening America’s doors to immigrants from non-Western European countries. Queens County (the borough of Queens) in New York City became the epicenter for these changes and is now one of the most diverse communities in the United States. Immigrant Crossroads addresses the absence, up to now, of academic studies of post-1965 immigration on American cities.

After the Introduction, the book is divided into three parts, each containing four to five chapters. The first part focuses on globalization, describing the new ethnic diversity resulting from international migration during a period of massive deindustrialization. Joseph Salvo and Arun Peter Lobo point out that the outmigration of Whites across Queens, combined with the in-migration of Asians and Hispanics, has resulted in multi-ethnic, integrated neighborhoods without a Black presence. David Kallick argues that immigration played a key role in Queens’s rebound during the 1970s. An increase in the numbers of immigrants more than counterbalanced the outmigration of Whites to the suburbs. Furthermore, because the immigrants tend to be entrepreneurial, immigration advanced neighborhood revitalization. However, Lynn McCormick points out that the economic outlook for immigrants has become more tenuous because manufacturing jobs have become increasingly less common in Queens particularly and in New York City generally. Worker-owned businesses will not be the answer to problems of immigrant unemployment, low pay, or poor working conditions among immigrants, says Christopher Michael. Only a handful of these firms exist and none has more than a hundred employees.

The book’s second part focuses on incorporation, i.e, immigrant representation in electoral politics and advocacy for immigrant access to social services. Arianna Martinez describes the challenges facing immigrant advocates seeking to sign up “Dreamers” for the Deferred Action for Childhood Arrivals (DACA) program—that is, how to reach the less educated, less assimilated, and less politically engaged populations. Alice Sardell documents the successful effort by Making the Road New York (a nonprofit that combines community organizing with social service delivery) and the New York Lawyers for the Public Interest (NYLPI) to enact state and city legislation mandating that medicine labels be made available in the seven most common languages spoken in New York City. Michael Krassner and Ron Hayduk describe the dilemma facing Queens Democratic Party leaders as a result of immigration: how to safeguard older incumbents from earlier-arriving European immigrant groups without alienating growing groups of new immigrant voters. Sayu Bhojwanti highlights the challenges of organizing facing the Queens South Asian community (Indians, Pakistanis, Bangladeshis). Because of its small size, South Asians have no choice but to engage in coalitions with other ethnic groups as well as large, powerful, citywide civic groups like the New York Civil Liberties Union. Ron Hayduk and colleagues argue that New York City’s participatory budgeting (PBNY) demonstration has the potential for increasing immigrants’ low citizen participation rates—which are associated with poorly designed social services. In PBNY, all residents 11 years old and older can decide how to spend a portion of the city’s budgeting. Unfortunately, the immigration participation rate in PBNY is low and there are numerous practical problems in carrying out town meetings in multi-ethnic neighborhoods where numerous translation services are required.

Part Three focuses on the creation of neighborhood spaces and identities and examines immigrant activism for community control of development. Sofya Apteker’s case study of Astoria (formerly New York’s largest Greek neighborhood) shows that public spaces like community gardens, farmer markets, and parks, have not had a uniform influence on ethnic interactions. Some promote interaction, others result in exclusion, while a third group has little to no impact. Two chapters in Part Three challenge the notion that growth coalitions of politicians and private interests can carry out large scale developments hurting immigrant communities. Donovan Finn shows how the Fairness Coalition of Queens (FCQ) organized the ethnically and racially diverse immigrant and working-class neighborhoods surrounding Flushing Meadows-Corona Park (FMCP) and altered the trajectory of three projects for this area initiated by Mayor Michael Bloomberg: Willets Point (a largely invisible immigrant industrial zone), a new professional soccer league stadium, and the the Billie Jean King Tennis Center (part of one of the world’s largest tennis facilities). FCQ’s success was attributable to “one important tool at its disposal, the ability to organize significant numbers of people whose lives would be negatively affected by these development proposals” (p. 286). On the other hand, Samuel Stein and Tarry Hum explain how Queens Neighborhood United (QNU, a small nonprofit) used a more radical, confrontational, and anti-capitalist strategy to successfully oppose the creation of a business investment district (BID) along Roosevelt Avenue in northern Queens introduced by the Bloomberg administration. (A BID is a defined area within which businesses are required to pay an additional tax [or levy] in order to fund projects within the district’s boundaries.) QNU has a lot of ideas (including the community control of land use), but “not a lot of capacity” (p. 318), so it is highly unlikely that QNU will be able to deliver affordable housing and needed social services to immigrants in the northern Queens communities that it claims to represent. The book concludes with two chapters arguing that immigrant communities can address existing problems by working with inter-group coalitions and getting a “seat at the table” with local governmental and civic leaders. Francois Pierre Louis Jr. shows how Haitian Americans United for Progress (HAUP) worked with other organizations to access resources for bilingual education, housing, welfare, and medical services and how it played a key role in mobilizing Queens residents in protest of police brutality (e.g., the infamous Amadou Diallo murder, 1990). Nazreen Bacchus notes that since the September 2001 terror attack, New York Police Department surveillance of Muslim communities as well as hate crimes have become a prime focus for community organizing: “Community leaders are working with the NYPD and building interfaith coalitions to address these issues” (pp. 359–360).

Immigrants Crossroads has weaknesses. Stein and Hum rely on overly vague, anti-capitalist rhetoric in their Flushing Meadows case study and too casually dismiss the value of Making the Road New York’s “redistributive populism” model (i.e., seeking incremental changes within the existing system). Furthermore, Hayduk and colleagues rely too much on impressionistic evidence to produce an overly rosy picture of participatory budgeting. Notwithstanding these limitations, this book represents an important contribution to the limited literature on how immigrants are changing the face of America’s cities. It would be a useful supplementary text for a variety of urban studies courses at the advanced undergraduate and graduate levels.

Previous PostAdvanced introduction to cities, by Peter TaylorNext PostGray to green communities: A call to action on the housing and climate crises, by Dana L. Bourland
0Shares
Book ReviewVolume 44: Issue 1 (2022)