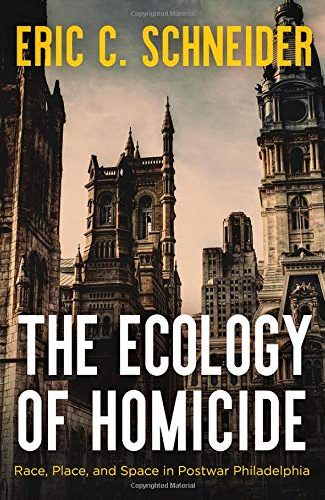 In The Ecology of Homicide, Eric Schneider sets out to establish the underlying factors that contribute to high rates of homicides in the minority communities of Philadelphia, and the inequities built in to the criminal justice system, from the 1950s through the early 1980s.

Why do African American men kill one another, as well as others, with such alarming frequency? Both historical and contemporary studies show that African American men are by far the largest number of victims and of perpetrators of urban homicides … Homicide among black men has driven [Philadelphia’s] homicide rate since World War II, if not before. The data are incontrovertible; the question is how do we account for them? (pp. 1-2)

Ecology provides several documentary accounts of the social ills that foment Black-on-Black homicides, covering the gamut of incidents of domestic abuse, gang altercations, and petty disagreements taken to the bitter end: A relationship goes off the rails; a weapon enters the picture with fatal results; the abused female turns on her abuser with his own weapon—because it’s there; relationships are strained by separation during wartime, or by the lack of job for the “provider” male authority, or because of an affair by either partner. These are all common factors in the ecology of domestic crimes. Homicide is often called a “crime of passion” for good reason.

(1) {[I]in African American neighborhoods marked by segregation, discrimination, and public neglect, violence was endemic, and it seeped into the home as well … . An environment of social insecurity shaped the behaviors of both African American men and women, and collectively they generated high levels of murder (p. 31).

What’s a city to do to reduce the violence? Schneider distills Philadelphia’s efforts, and they fall into the pattern of crisis-response tried by many cities. The city relied on the community to intervene on a personal and cultural level, to address the economic disparities correlated with groups having high levels of violence in their neighborhoods, and to hold the criminal justice system accountable for the actions of police officers.

The murder of In-Ho Oh in 1958 prompted a not uncommon response by civic-minded powers-that-be: re-develop crime out of the community. Chapter 3 follows Oh, a student of international politics at the University of Pennsylvania, and an interpreter for the U.S. Army during the Korean War, who was murdered by a group of African American youths who’d been kept out of a community event at a nearby church. Oh crossed the paths of these youths while on a walk to mail a letter, when they decided to beat and rob him. The rarity of an inter-racial murder, and the international attention the incident garnered, led the University of Pennsylvania to revise their plans to expand their footprint in west Philadelphia, and to open more doors of opportunity to the underprivileged community members therein (and, in fact, Penn has become a national model for university-led revitalization efforts that also benefit surrounding low-income, minority communities). But “public officials acknowledged they had no plan for displaced residents, and eventually a sit-in at City Hall [was organized] to protest the planned clearance of the area” (p. 46). Like the infrastructure marvels of Robert Moses in metropolitan New York City, which displaced whole communities but catered to outside interests, the redevelopment plan was seen as benefiting only the university and its supporters, and “it failed to accomplish the larger social goals implicit in the concept of a ‘university city’” (p. 49.)

On a parallel track with progressive community development strategies, the city sought to diversify the police force to include officers of color more attuned to the needs of the community, who would cast aside prejudice and apply procedural justice principles in all their interactions with the public—suspects and arrested persons included. Yet Philadelphia police use-of-force atrocities are given a harder focus, while policies which would eliminate instances of unjustified violence visited on suspects—even eliminate the escalation of force that could well have been avoided—are left uncatalogued. “Philadelphia police were notorious for using the ‘third degree’ and severely beating suspects … . Feelings that police treated blacks unfairly, that they offered ‘neither justice nor protection,’ were widespread and long standing” (p. 52). The city set up a Police Advisory Board, but the “case files of the PAB, though incomplete, provide evidence of the fractious relations between police and members of minority communities in the period leading up to and immediately following the 1964 civil disturbance” (p. 54). Discipline apparently was the primary solution the Philadelphia politicians considered—reform through sanctions of individual officers—and eventually the PAB was disbanded.

In chapters 5 and 6, Schneider dwells on the failed attempts at such composite strategies in “The Children’s War” and “Street Wars: Shooting Police and Police Shootings,” respectively. For generations, police officers had been trained—when they were trained—using an exercise called “Shoot-Don’t Shoot.” Police academies contrive scenarios which force the cadet to make instant decisions about people who approach them and common situations they would encounter on the street. The upside result is a recruit who learns the necessary survival instincts necessary in the heat of an enforcement moment. But, over the years this and other adopted pedagogies have reinforced a “warrior culture,” where the immediate instincts to protect overcome the mission to serve. In recent years progressive police chiefs have balanced, even countered, the policies heavy on methods of compliance with procedural justice awareness and training.

The history reviewed between the covers of Ecology would fill a gap in any criminal justice curriculum. Schneider’s visits into the past establish the history of built-in economic inequities that undergird conditions of violence in underserved communities. It’s a grim examination of nearly 4 decades’ worth of homicides and injustices—and an indictment of the courts, cops, and community organizers. Police academies could—and now more often do—expose more recruits to the dark side of law enforcement history.

But Ecology’s account of Philadelphia’s police saga ends in the early 1980s, too early to see on the horizon, an emerging culture of guardianship and re-imagined policies championed by progressive police chiefs, which have been slowly permeating law enforcement agencies throughout the United States.

So, perhaps a follow-up volume is in order. Surely the West Philadelphia Redevelopment Plan wasn’t the only community action game in town? Does the failure of the Police Advisory Board and aborted attempts to replace it with civilian review boards mean neither could work, if given more thought?

Forty years have passed since the last salient statement from Schneider:

Despite investigations by the Department of Justice, hearings by the Civil Rights Commission, and lawsuits against the city, it remained nearly impossible to hold police accountable for their actions … . Yet surprisingly, this seemingly intractable situation changed. During the 1980s, despite an increasing homicide rate, both police killings of civilians and the intentional killings of police officers declined as the city stepped back from a violent abyss. (p. 109)

The Ecology stops long before the governor of Illinois stopped executions (1999) and commuted 160 death sentences (2003), and the success of chief John Timoney—in Philadelphia, no less—in reducing homicides in the late 1990s, to name just two milestones in efforts to promote more just incarceration policies and to reduce violence in the communities that police serve. Demonstrable improvements in underlying economic conditions, declines in violent crime, progress in civil rights enforcement, diversification of sworn law enforcement personnel, and a slow but accelerating reform of police agencies have taken place over the past 4 decades with mixed results. There may be as many stories of failures as of success (with the George Floyd case in Minneapolis being the most recent tragic example), but perhaps some successes have led to meaningful long-term reforms. Where progress in early 1980s Philadelphia seemed surprising to Eric Schneider, a sequel giving a bit more ink to the reform-minded police chiefs that followed might provide some hope that the problems are not intractable.