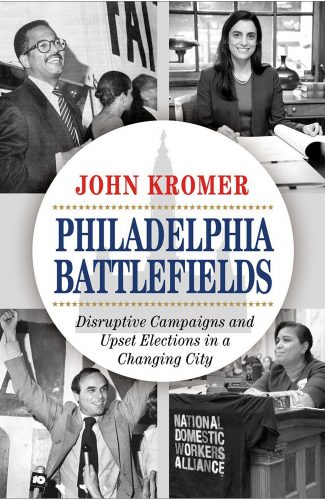 Philadelphia Battlefields dissects the origins of successful insurgent campaigns in Philadelphia in a book that is equal parts analysis and call to action. Running without the Democratic Party’s endorsement in a one-party town seems like a fool’s errand. But John Kromer analyzes the primary campaigns of candidates who took down entrenched incumbents and well-funded insiders on the strength of organizing skills, the right message, and the rising tide of the political moment. Kromer imbues these efforts with a certain righteousness, ending his book with comments by former Philadelphia mayor Wilson Goode proclaiming that the true mission of an officeholder is “to do what only they can do” (p. 294) to help people.

Kromer does not make the insurgent’s path out to be an easy one. Before he was mayor and later governor, Ed Rendell was the outsider candidate for Philadelphia district attorney. Kromer depicts Rendell dedicating “all his waking hours” (p. 113) to the task. “He had campaigned every day from dawn until late at night,” Kromer writes, “greeting commuters at subway stations and rail platforms in the early morning and shaking hands with patrons of neighborhood bars as midnight neared” (p. 113). The skills needed to pull all this off are varied, of course. Kromer notes that Rendell’s bar visits benefited from his encyclopedic knowledge of and passionate opinions on local sports teams that served as a reliable conversation starter.

The book makes much of the organizational structure of party politics in Philadelphia, where each political ward is comprised of several divisions, effectively sectioning the city up into what Kromer calls 1,500 villages. In one of the few nods Kromer offers to the party, he notes that the Democrats who serve as ward and division leaders comprise the most diverse and representative assemblage of any community organization in the city.

While the party organization is meant to activate and educate on behalf of party-backed candidates, Rendell took advantage of natural rivalries within the party, building relationships with division leaders who had been passed over for the more prestigious ward leader position. While the outsider candidates Kromer profiles may not be able to match the organizational heft of party-endorsed candidates, like Rendell they find a way to build some form of neighborhood outreach team to help get the word out in what are otherwise cash-strapped campaigns. Much like the other candidates profiled here, Rendell was outspent by a margin of more than 7 to 1.

An irony that Kromer does not focus on is that yesterday’s insurgent can very easily become tomorrow’s insider. Rendell himself would go on to not only run with party support, but become the chair of the Democratic National Committee, becoming in effect the living embodiment of the party establishment.

To be fair, the other candidates Kromer profiles have not become national party figures like Rendell. More typical is the first candidate Kromer discusses, Rebecca Rhynhart, who launched a campaign for city controller in 2017. Rhynhart, Kromer writes, worked hard, engaged in relentless outreach, picked a good time to run as a clean candidate in a city where several leaders were facing indictment, and took advantage of the fact that she was not hemmed in by establishment policy positions.

For Rhynhart and others, Kromer highlights the capacity of insurgent candidates to present themselves as the new face, untarred by old policies and old failures. Rhynhart, for one, did not have to embrace tax and development deals that politically saddled organization candidates.

While Kromer is on firm ground when he highlights the potential capacity of insurgent candidates to succeed, he stumbles in his attempts to extract larger conclusions about the state of party politics. At one point, Kromer appears to semi-seriously write the Philadelphia Democratic Party’s obituary: “The party is a dinosaur. It used to be powerful, but it is now headed toward extinction” (p. 186). He cites as evidence for his conclusion the very insurgent campaigns he profiles like the 2017 controller’s race. Which is to say, after cherry-picking examples of outsider candidate success he concludes the party has lost its grip. But he chose those campaigns precisely because they were unusual. Kromer makes no effort to count how many times the party’s endorsed candidate won the controller’s race or the district attorney’s race, and thus offers no analysis of the overall likelihood of insurgent success.

Indeed, a seemingly offhand comment affirms the degree to which Kromer is committed to an optimistic portrayal of political insurgency regardless of the facts at hand. Kromer writes that “in the presidential primary, Bernie Sanders had finished strongly” in Philadelphia in 2016 (p. 286). Strongly implies some measure of success, some measure of competitiveness. But in Philadelphia, Bernie Sanders received 37% of the vote against Hillary Clinton—considerably less than he received in Pennsylvania as a whole, and considerably less than he received nationwide. Candidates losing by 26 percentage points are not widely considered to have much to brag about. His comments on Sanders are admittedly tangential, but they are emblematic of Kromer’s desire to extrapolate from the real potential for insurgent success to his desired conclusion that the establishment has failed.

While he may overstate the potency of the insurgent, Kromer nonetheless makes a compelling case that what happens at the municipal level matters deeply—not only as a source of policies that immediately and directly affect people lives, but also as a source of political talent that will feed the pipeline to higher office. “Citizens who are concerned about the future of American democracy need to be aware that elections held every year at the municipal and county level will, in the aggregate and over the long term, determine the extent to which government at the national level could fundamentally improve, or not” (p. 290) Kromer asserts.

There is hope on these pages, and a call to action. An academic, practitioner, activist and once a failed insurgent candidate himself, Kromer has lived, taught, worked, and believed in what he preaches. To students laboring under the lament that city politics are irrevocably calcified, Kromer has provided an invaluable guide on how the outsider can get inside.