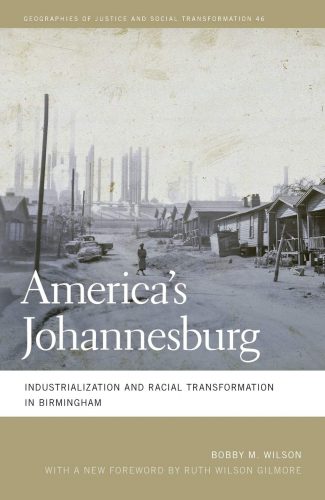 Initially published in 2000, Bobby Wilson’s America’s Johannesburg represented one of the first efforts to place Black urban life within the context of race capitalism and the socio-spatial realities of arrested development caused by the political economy. The 2019 second edition appeared in a period dominated by the Trump presidency, the Black Lives Matter movement, and an awakening spawned by the coronavirus pandemic and the murder of George Floyd. These events exposed American racism’s deep fault lines and the race-connected practices that Wilson’s insightful book discussed some 20 years ago.

The 2019 edition has a foreword written by the noted geographer, colleague, and friend of Wilson, Ruth Wilson Gilmore. Her insightful foreword contextualizes America’s Johannesburg and the interaction between race capitalism and Blacks’ socio-spatial realities. The book, she says, seeks to understand how industrial capitalism and Black labor shaped Birmingham and the Black experience. Wilson uses a Marxist framework to explore the social transformation of race and place in this southern industrial city. Wilson seeks to understand why Birmingham became the civil rights movement’s flashpoint. Gilmore stresses that race capitalism, regardless of the form it takes—agricultural, industrial, or knowledge—always situates Blacks at the base of the economy, forces them to take low-wage jobs, and arrests development in the communities where they live.

America’s Johannesburg seeks to understand the historical development of race-connected practices in Birmingham, Alabama, and explain the city’s role and its institutions in restraining and facilitating individuals and groups’ action that engaged in such practices. The book’s structure is divided into two sections. Section 1 consists of the first eight chapters, which focus on slavery and the reconstruction period. The book’s first five chapters explore slave (agriculture) capitalism, while chapters 7 and 8 examine the reconstruction period. These two chapters (7 and 8) investigate Black workers’ transition from slavery to free labor. Wilson views the planter class as capitalist and slavery as a form of agricultural capitalism. He argues that the study of racism in Birmingham must start with an analysis of race-connected practices during slavery, the state’s role in sustaining these practices, and the transition from slave to free Black labor.

Section 2, chapters 9 through 17, grapple with the rise of industrial Birmingham and industrial capitalism’s role in shaping race and place in a southern city. Wilson shows how race-connected practices informed by White supremacy and the exploitation of Black labor shaped race relations, Black socio-spatial realities and laid the foundation for the emergence of the civil rights movement.

Wilson argues that Birmingham’s founding in 1871 represented a continuation of the planter class’s power. The planter class, and their new allies, bankers, and railroad entrepreneurs drove Birmingham’s development as an industrial giant. The city tied its fate to coal and iron ore mining, iron and steel manufacturing, rail transport, and a Black labor force willing to work long hours for low wages. The private sector and government conspired to build this city. Factory owners needed cheap Black labor, and local government used convict-lease labor and waged a relentless war against vagrants to produce such a labor force. Industrial capitalism, thus, replaced slavery as another but very different form of extreme oppression and exploitation of Blacks.

Wilson argues that within this context, elites built a dual labor system in the factory. White workers held the higher-paying skilled positions, while Blacks held those hot, dirty, low-paying jobs that no one else wanted. This dual labor system minimized competition between Black and White workers and informed White supremacy and privilege. The use of cheap Black labor to drive industrial development also led to the racialization and underdevelopment of Black communities. Wilson argues that race capitalism forced Black workers to reside in places with arrested development. From the slave quarters to the sharecroppers’ villages to the ghetto, Blacks lived in development-arrested communities. Inadequate schools, decaying physical environment, under-resourced institutions, food insecurity, and poor health care services characterized these underdeveloped places. Initially, the city used racial zoning laws to segregate Blacks to the most undesirable and inexpensive residential lands. Later, after the Supreme Court ended legal segregation in 1947, cities used housing costs and housing values to create residentially segregated communities.

Focusing on race capitalism Wilson argues that low-wage jobs and Black concentration in development-arrested communities circumscribed Blacks’ life chances in the city. These underdeveloped communities reproduced Blacks at the bottom of the economic order by keeping them from acquiring the type of education and training necessary to compete with White workers. America’s Johannesburg examines race and place in a unique American city. Urbanists can still apply Wilson’s theoretical and conceptual framework to the study of American metropolitan area.

Wilson’s core argument is that the political economy shapes race and place in the American metropolis because race and inequality are so ingrained in capitalism that one cannot exorcise them. Within this conceptual scheme, the capitalist project forces Blacks into low-wage jobs and concentrates them in development-arrested communities regardless of the form it takes. In Birmingham’s case, the combination of Blacks’ extreme oppression and exploitation as industrial workers and the hardship of living in segregated, development-arrested communities caused Birmingham to be a civil rights flashpoint. Wilson’s book stands on Black theorists’ shoulders, including Walter Rodney, Claudia Jones, Cedric Robinson, Manning Marable, Angela Davis, and Clyde Woods. These Black theorists stress the connection between capitalism, race-connected practices, and the arrested development of Black spaces.

America’s Johannesburg is not an easy read, and much of the book’s content focuses on the political economy of slavery and industrial capitalism. The residential development section of the book is poorly developed. Wilson explains how racial zoning and how city leaders and later, how government and realtors, used housing costs and values to segregate Blacks in development-arrested communities, but he does not elaborate on how this process has unfolded. Wilson (2000) covers that topic in his more richly detailed 2000 book, Race and Place in Birmingham. This shortcoming notwithstanding, America’s Johannesburg should be read by anyone concerned about race and place in American cities.