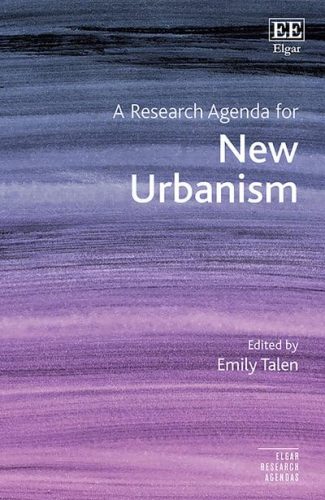 Professor Emily Talen occupies a unique place in the urban studies and planning academy. Trained in planning and geography, she is among the most prolific urban scholars in the world. Her citation counts are astronomical, and her Rg score stands among the giants in urban scholarship. She has published highly rigorous and cited scientific papers on urban equity, social capital, urban policy, and more. Yet, she takes pride in defining herself as a normative theorist, one who pursues “the quest for excellence, quality, and beauty in our built environments—how our metropolitan areas ought to be” (Talen & Ellis, 2002).

This edited book, perhaps more than most, reflects the twin perspectives of its editor. It is both a serious and rigorous examination of the challenges of New Urbanism as well as an unapologetic promotion of that school of thought. In the introduction, Talen states,

The researchers writing in this book have accepted that the principles of New Urbanism are part of a long standing, well-articulated school of thought about urban problems and their solutions, but they argue that both the assumptions on which New Urbanist arguments have been articulated and the problems of implementation that New Urbanists encounter need more examination. A good number of them are also seeking solid evidence backing New Urbanist claims—evidence that could be leveraged to make the case for New Urbanism more convincing.

If you seek a rigorous scholarly critique of New Urbanism, you won’t find it here. What you will find are clearly written and edited papers that address critical tenets of New Urbanism in ways that most ardent disciples of New Urbanism—primarily architects and designers—are not used to considering.

The book is not long—only 174 pages including an index and 11 chapters. In the first chapter, Talen makes the case for why a New Urbanist research agenda is needed. In short, she proclaims, “there is still a lot we still need to know about creating and sustaining good cities.” It is hard to disagree with that. The remaining chapters cover a wide range of topics, from theoretical foundations to the future of urbanism, written by a talented mix of young and seasoned planning and urban design scholars.

Cliff Ellis offers a theoretical perspective and considers political contours, what’s real and unreal in urban design, and the role of tradition. These are interesting and important questions, especially since New Urbanist developments often lack broad political support and are frequently criticized as inauthentic. Ellis does not, however, offer research designs that can settle these questions.

Donovan Finn and Gordon Douglass explore the relationship between do-it-yourself (DIY) urbanism and the New Urbanism agenda. This chapter comes as somewhat of a surprise, as New Urbanists are not known for their flexibility or tolerance for deviance from formal design standards. The authors worry that DIY urbanism may not fit well in a more formal system of design—I share this concern.

The role of retail is explored by Conrad Kickert, largely because retail is key to creating vibrant walkable environments. Yet what kind of retail can lead to urban environments that are both walkable and profitable is rarely explored—a question made more complex by the growth of online shopping. While providing no answers, Kickert nicely embeds the question not only in the field of urban design but also in the well-established literature on location theory and retail economics.

The next chapter by Wes Marshall addresses the broad challenge of transportation, a field with its own mammoth research industrial complex. Drawing on that vast body of work, Marshall suggests that more research is needed on how to reduce automobile dependency, a challenge compounded by the coming of autonomous vehicles. Marshall does not, however, explore other—perhaps more pertinent—aspects of the coming transformation of the transportation industry, such as transportation-as-a-service and new forms of micro mobility.

The social roles of New Urbanism are considered by Sungduck Lee. In a suitable encore to Jackson, Lee expands the focus of discussion to social sustainability. While the charter for New Urbanism contains laudable social goals—community, equity, and common good—strategies for achieving these goals are not well known. To gain new knowledge on such strategies, Lee offers indicators of social sustainability as a framework for future research.

Matthew Hardy explores the question of urban growth, primarily from a design perspective, and laments the lack of research on urban growth in general. Further research, he suggests, could be based on post occupancy surveys and case studies of best practices in urban design. From this, researchers can build a science of cities; however, Hardy fails to acknowledge that such a science has been building in other disciplines for centuries.

Michael W. Mehaffy ties New Urbanism to the New Urban Agenda, the commitment by all 216 countries of the United Nations at Habitat III. He claims that tie can be made by noting the parallels between the New Urban Agenda and the Charter of the New Urbanism. Both of these documents, however, while ambitious in their aspirations, are short in specifics regarding implementation. Research that yields insights on how to further implementation, he suggests, must build on specific agenda elements for a sustainable and healthy urbanism.

The final chapter explores the future of urbanism. Here, Ajay Garde returns to many of the issues raised in previous chapters and identifies themes that researchers must address in the future. These themes include demographic change, climate change, global economy and e-commerce, technological change, and zoning reform. Few would disagree with that.

Although the book does not conclude with a chapter that brings it all together, the reader comes away with an appreciation that for New Urbanists to succeed they must undertake a closer look at the assumptions that underlie their agenda, conduct social science research that explores those assumptions, and identify new ways in which that science can guide their practice. Toward this end, every chapter in the book offers new insights for those committed to the practice of New Urbanism. They, and perhaps PhD students looking for dissertation topics, are perhaps the most likely audience. Not all the chapters, however, are well grounded in the existing social science, and none question the underlying validity of the New Urbanist agenda. But then, that was never the intent.