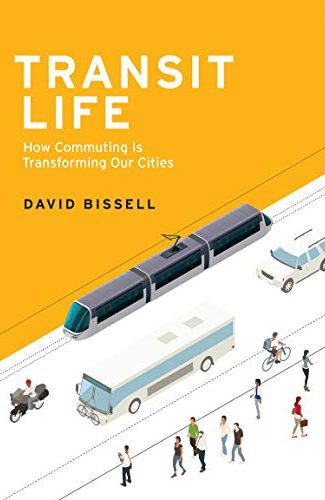 In Transit Life, David Bissell presents an interesting exploration of several aspects of transportation—focused primarily on the work commute—in Sydney, Australia. It should be made clear upfront that while Bissell does discuss public transportation at various points in the book, the “transit” in the title is best understood as personal transportation through the metropolitan region and not public transit, which is generally the connotation of “transit” in North America. I would also argue that the subtitle, “How Commuting is Transforming Our Cities,” is misleading, and it makes the book sound like a conventional urban planning text, when in fact the book is much more interested in the impact of commuting at the individual level and the various strategies commuters undertake to enhance their individual mobility. Rather than being a conventional urban planning book, Transit Life is grounded in the emerging mobilities discipline; thus, many of the insights are drawn from the social sciences as much as, or more than, urban planning.

As an aside, there is something somewhat unsettling about reviewing a book on commuting when, for so many white-collar professionals, working from home during the pandemic is vastly more common than it used to be—and the “commute” largely involves moving from the bedroom to a home office or other workspace. Bissel was not focusing on this specific inequity (that the ability to work from home is not equally available across occupations), but he reminds the reader at several points that severe inequities are embedded in the transportation system, with higher income commuters often having more options available to them as well as better access to the political system to ensure that future improvements to the transportation system serve their needs. While very few individuals will miss commuting per se (the average 70-minute round trip for Sydney commuters is the highest in Australia), a considerable number do prefer having a clear differentiation between “home” and “work” (Nippert-Eng, 2008). Nonetheless, if the 2–3 days/week telecommuting pattern becomes more entrenched among professionals after the pandemic recedes, this could well reshape cities, or at least downtowns that are generally dominated by professional-sector employment.

Bissell touches on several aspects of urban commuting, though generally not in great depth. His approach is to raise an issue, illustrate it with the interviews he conducted or tie it to his field research (he relocated to a different neighborhood, Castle Hill, at least in part to experience a new commute with fresh eyes), and ground it in the mobilities literature. As Bissell shies away from making any grand claims about the nature of commuting, let alone pronouncing on what infrastructure program might salvage the commute (as might be expected in an urban planning text), the strength of Transit Life comes from encouraging the reader to think about the familiar in unfamiliar terms, namely through a social science lens.

Chapter 1 covers learning how to become a commuter. How do people learn about the best journey? Some commuters, armed with advice from online algorithms, seem determined to optimize their trip, while others take a more experimental or somewhat haphazard approach until they finally find a groove after a period of several months. While Bissell does not expand on this at length, the fact that transit trips (particularly those made by commuter rail) require learning, and adhering to, a schedule makes them appealing to some commuters and alienating to others. Bissell also takes a course on urban cycling, as this is a skill that does have to be learned given the challenges of urban cycling on streets designed almost exclusively around the automobile. Bissell learns, somewhat to his surprise, that there are in fact different “schools” of urban cycling counseling different levels of assertiveness. The chapter ends with a reflection on how commuters handle different kinds of disruptions that throw them off their rhythm.

Chapter 2 focuses primarily on encounters made during commuting, and thus his examples and interviews are drawn almost entirely from public transit journeys, though car-pooling is mentioned in passing when one respondent talks about how her carpool fell apart when her friend moved away and another respondent mentioned how limited carpool and rideshare options seemed to be in Sydney. As might be expected, quite a few respondents prefer to withdraw into a kind of bubble and do not encourage interaction. This is by no means universal; friendships have been made among regular customers, though this is far more common on commuter rail than other forms of transit. Bissell does report on some negative interactions he observed when teenaged boys started acting out but scattered when guards are summoned by other passengers.

Chapter 3 dwells on the time spent in commuting, with a special focus on super-commuters who travel for close to an hour each way. Bissell probes what they are trading their time for and their coping strategies. One of the respondents works productively on her train ride, but another who had hoped to work on the bus finds it is simply not conducive for serious work. While working or reading (another popular commute activity) is not possible for drivers, listening to music or audiobooks are noted as helping pass the time. Chapter 3 is a brief chapter. It is fair to say Bissell does not contribute much to this topic that hasn’t already been covered. Bissell returns to examine the theme of car radio and specifically listening to radio traffic updates in more detail in Chapter 5.

Chapter 4 is about the spaces of commuting. What is so unusual about this chapter is that it is almost entirely focused on advertising campaigns that use space in the transit system to sell their wares or, better still, create experiences that will make their brand memorable. This chapter would have been stronger if Bissell had spent some time discussing the trade-offs inherent in these arrangements. For instance, does the transit agency generate enough revenue to truly benefit the riders who are exposed to these advertisements? Bissell might also have probed how transit users respond to advertising “experiences.”

Chapter 6 looks at transit infrastructure but from two unusual perspectives. First, Bissell notes that given the false starts and unfulfilled promises around many urban infrastructure projects (due to the fact that they are extremely expensive and the politics around building in urban environments is complex) the public generally has considerable skepticism around any announcement of progress on much delayed projects. In the case of the North West Rail Link, a rapid transit line designed to connect Sydney to suburbs northwest of the city, the public had faced a decade of delay and was unconvinced that the project was proceeding. The government proceeded to build an information center with videos and scale models of the project, which in turn generated some interest and enthusiasm for a project that finally seemed to be back on track, and indeed, the transit line opened to passengers in 2019 (Plenary Group, 2021). The remainder of the chapter focuses on local activism to improve transit. Given the fraught history of infrastructure investment in Sydney, the profiled group (Sydney Alliance) focuses on smaller scale investments and operational improvements that would make an immediate improvement in commuters’ lives.

Transit Life would not be the best starting point for a researcher looking for a comprehensive resource on urban commuting, in part due to the difficulties in generalizing from field work and interviews with a small number of respondents. Transit Life is, however, an interesting exploration of the mobilities field, showing how the commonplace can be investigated from a number of new angles, such as how governments may need to work overtime to overcome public cynicism surrounding transportation planning projects arising from the failed promises of the past. The book would be most valuable for undergraduates or graduate students in mobilities, sociology, or urban planning students, particularly urban planning students who are looking for examples of reconceptualizing planning topics from a social science perspective.