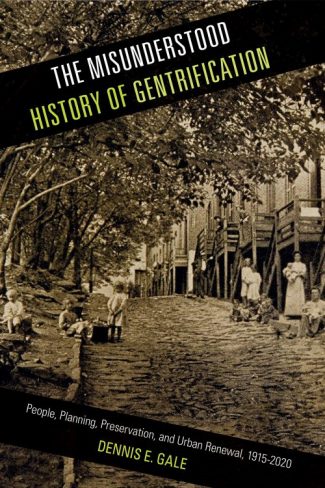 Writing in 1960, the editors of the Washington, D.C., Evening Star sent a message to the country’s urban planners: private revitalization was a better policy for remaking the inner cities than urban renewal. Not a decade before, many center city residents had watched in horror as federal planners had raised the entire neighborhood of Southwest, the country’s first urban renewal site, sending its 23,000 poor and working-class residents scrambling for new housing. The private revitalization that was then remaking Georgetown, Capitol Hill, and Foggy Bottom, the editors argued, reused beautiful old houses, respected the city’s history, and displaced few residents.

In his new book, The Misunderstood History of Gentrification, the veteran urbanist Dennis Gale takes these urban revitalizers championed by the Star as his subject, describing their origins in the early decades of the 20th century, explaining how they affected urban redevelopment policy in the post–World War II period, and mining their activities for ideas about how to address urban decline today.

Gale studied under and eventually came to lead the band of urbanists who fueled George Washington University’s Center for Washington Area Studies. Created in the midst of the “back to the city movement” when D.C. was a national leader in what Americans were just then beginning to call “gentrification,” borrowing the term from the English, these scholars produced some of the pioneering works on the topic. Gale’s 1982 dissertation, “Restoration in Georgetown, Washington, D.C., 1915 to 1965,” distinguished him as a promising young scholar, and a series of subsequent books in the 1980s made him a leading voice in the field. Now an emeritus lecturer in urban studies at Stanford, Gale is circling back to provide what he calls “a crucial prologue” (p. xi) to the burgeoning scholarly and public debate on gentrification.

Gale’s principal aim is to remind us that gentrification is much older than most laypeople and scholars acknowledge. Focusing on the communities of Beacon Hill in Boston, Georgetown in D.C., and Greenwich Village in New York City, he asserts that what journalists then called “remodeling” or “revitalization” had been happening in older, primarily East Coast cities since the 1910s. Drawing from his dissertation and secondary sources, Gale notes that these early efforts, what he calls “embryonic gentrification,” were driven by owner occupants’ interest in neighborhood history, architecture or social cache, and secondarily by developers and real estate agents intent on cashing in. Gale also provides a short treatment of abortive efforts in Philadelphia, Charleston, and New Orleans to show that gentrification was less an East Coast than an old city phenomenon. While a small number of scholars have studied this pre-1970s gentrification in individual cities, Gale gives us a synthetic, regional view.

Just as importantly, he draws out the implications of incorporating this history into our discussion of late 20th century urban planning. For much of the post-WWII period, urban planners had used the “obsolescence thesis”—the idea that housing stock became outdated as it aged, leading those with means to decamp for newer neighborhoods—to craft urban policy. This notion undergirded the mid-century move toward urban renewal, the policy of tearing down older neighborhoods for the purpose of replacing outdated housing and attracting middle-class (White) residents back to the cities. With federal planners destroying whole communities and dispossessing the (largely Black) residents, early gentrifiers, whose own neighborhoods were sometimes threatened by the planners’ bulldozers, presented their approach as a superior alternative.

Faced with public protest and lenders’ reluctance to take on massive, risky redevelopment projects, urban planners came to agree with the gentrifiers. They shifted policy toward projects that mixed private redevelopment and small-scale publicly subsidized demolition and building in the 1960s. Pursuing a policy of devolution, the Nixon administration continued the trend by embracing block grants, tax incentives, and other tools that, over time, Gale argues “largely disassociated [revitalization programs from the] vulnerabilities of state sponsorship” and “conveyed an image of diffuse, often indeterminate agency” (pp. 205–206).

Gale’s is right to critique scholars of late 20th and early 21st century gentrification for using the term as a “convenient catch-all concept for nearly any forms of urban development deemed to disadvantage poor, working-class, and minority residents … ” (p. 206). Social scientists must be attentive to the small but meaningful differences between various iterations of socioeconomic phenomena. (Some scholars have, in point of fact, made the distinction that Gale demands, identifying different “waves” of gentrification with distinct catalysts, modes of expression, and effects.) But Gale seems to want it both ways. After explaining that advanced gentrification was far more diffuse and indeterminate than its predecessor, quite literally melded into the bone and sinew of neoliberal urban revitalization policy, he chides contemporary scholars for seeing it in most urban revitalization programs today.

Gale is intent on distinguishing between embryonic gentrification and the more ubiquitous forms of revitalization policy popular in many cities today because his secondary project is to “stimulate fresh thinking about the goal of reversing urban decline in America, including our quest for diverse communities welcoming to people of all incomes, races … ” (p. 198) by studying the embryonic gentrification model. Gale contends that embryonic gentrification offers a usable vision for a more just city if it can be decoupled from the displacement of the poor. But as the anthropologist Brett Williams has argued, gentrification that leads to race and income integration is best understood as “stalled,” specifically because gentrifiers, embryonic or advanced, have, with only a few notable exceptions, not intended to live among the poor but to displace them. Even the small number who have been willing to do so have typically set in motion market and social forces that push the poor from their homes (Williams, 1988). We cannot decouple gentrification from displacement. If we could, by the definition first advanced by Ruth Glass in 1964, and employed by Gale, it would not be called “gentrification.”

This aside, The Misunderstood History of Gentrification is a critically important addition to the burgeoning literature on the subject. With his broad scholarly vision, Gale delivers on his promise of providing a prologue to contemporary gentrification studies and, in so doing, challenges us to view public post-WWII urban revitalization efforts anew.