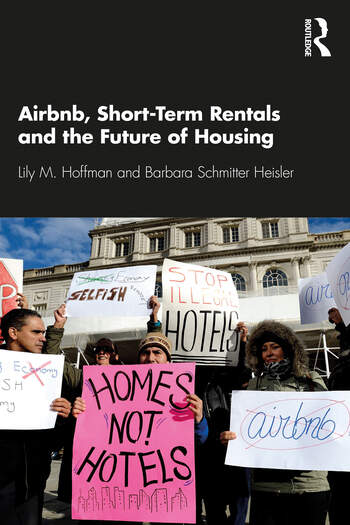 Airbnb and short-term rental (STR) housing is a topic of increasing interest and concern for urban researchers, policymakers, and activists, and this book constitutes an excellent response to this interest. While much of the academic literature has looked at the Airbnb phenomenon from a tourism framework, Hoffman and Schmitter Heisler go further, wondering how Airbnb and STRs affect housing markets and communities in eight major cities where tourism intersects with stressed housing markets: New York, San Francisco, Los Angeles, and Boston (in the United States); Melbourne and Sydney (in Australia); and Berlin and Munich (in Germany).

These cities were selected because they have different housing systems and because the global financial crisis (GFC) affected their housing markets differently. Nevertheless, these cities “have become a battleground for proponents and opponents of Airbnb” (p. 4). Locating the origins and success of Airbnb in the conditions wrought by the 2008 financial crisis, the authors bring together a diverse body of literature, including reports and newspaper articles, to examine the struggles of local authorities and communities to protect their housing and neighborhoods from the increasing proliferation and commercialization of Airbnbs. The book is divided into two parts (with a total of five chapters), bookended between an Introduction and Conclusion. Part 1, which focuses on the United States, has three chapters; Part 2, which focuses on Australia and Germany, has two.

In the first chapter, the authors provide a brief history of the Airbnb industry which emerged as the heart of the “sharing economy” (that is, as a type of homesharing) in the middle of the GFC. Over time, this type of temporary arrangement became an attractive and profitable business model for using houses, apartments, and underutilized rooms as temporary accommodations for visitors. Airbnbs have become a legalized form of housing and an attractive investment for a group of professional operators and corporations and more broadly for the real estate sector. Although the book focuses on the United States and Europe, Airbnbs operate on a global scale. Chapter 1 also highlights the hyper-financialization of American housing, which triggered the GFC and the consequences for the housing market. This included a decrease in homeownership, which resulted from the large number of foreclosures during and after the GFC, and the increased housing cost burden experienced by renters. The rental sector experienced a significant transformation with the entry of new actors—“private equity funds and financial firms not previously involved in real estate whose focus is primarily on short-term profit … attracted to what has become a global market” (pp. 16–17). These transformations have made the short-term rental market a significant housing issue.

Chapter 2 discusses the struggle to access Airbnb and STRs data in the four American cities, information needed by authorities to be able to identify negative impacts and to design regulatory policies. In Chapter 3, the authors highlight the impact of Airbnbs on the number of rental units, on increases in rents, and on housing prices. They then discuss the high degree of concentration of STR and Airbnb housing in certain neighborhoods. One of the consequences of such concentrations is the displacement or eviction of long-term renters due to rising rents and the loss of residential housing through conversion to STRs. Hoffman and Schmitter Heisler discuss racialized gentrification in New York, Boston, and San Francisco caused by Airbnbs; negative impacts on incumbent residents include loss of identity, strained social relations, and a reduced quality of life. The authors reflect on the challenges and difficulties for local authorities. How can they regulate Airbnbs and STRs to protect residents’ housing needs and quality of life?

Chapter 4, the start of Part 2, focuses on the impact of Airbnbs on housing and communities in Australia. Like the United States, Australia is a country of homeowners, and the neoliberal policies in both countries have been responsible for the increasing financialization of housing (that is, thinking of housing as a commodity). However, despite the similarities between the two countries, Australia avoided the GFC. “Unlike the USA where house prices plummeted and were followed by wide-spread mortgage defaults, house prices in Australia remained high and increased steadily in the subsequent period” (p. 81). Tax policies played a fundamental role in promoting homeownership and an increase in investment in housing. The Australian rental sector is not very attractive because it has not benefited from the tax benefits given to homeowners and because it is insecure. Neoliberal policies and practices have transformed housing into an asset and have created increasing difficulty for young people to access homeownership. This has contributed to growing inequality and polarization between the “housing haves and have-nots” (p. 84). Airbnbs in Australia have taken advantage of the existing investor-owned and mostly vacant apartments (p. 85). In 2012, the platform opened with 5,000 listings. By 2017, the number of Airbnbs had grown to 160,500 and the government and tourism organizations forged partnerships with the platform. Airbnb expanded rapidly in the inner city, mainly in Sydney and Melbourne and near beach communities. The exponential increase in Airbnbs and the large concentration of Airbnb listings in high-rise apartments in the two Australian cities negatively impacted the quality of life of apartment residents and neighbors (e.g., noise, crime, and strangers in the common areas of buildings), a situation that has given rise to activist organizations that seek to defend the quality of life. Interestingly, Australian local authorities have a less restrictive position vis-à-vis Airbnbs compared to the American ones.

Chapter 5 presents the German case. Munich and Berlin have fewer Airbnb listings than is the case for the American and Australian cities. The authors account for this difference, stressing the fact that Germany is a country of renters and has “a corporatist, non-financialized and somewhat ‘boring’ housing system” (Wijburg & Aalbers, 2017, cited by the authors on p. 104). When financialization occurred, it took place primarily in the large rental market, not in the home mortgage market. “The low homeownership rate and the conservative home finance system made for relatively mild impact of the 2008 GFC on the German housing market” (p. 106).

The government of the Federal Republic of Germany (West Germany), after World War II, was able to respond to the serious housing crisis, based on the principle of “common interest,” subsidizing construction by providing interest-free loans to building associations to be paid back over a 30- to 35-year period. Investors were required to rent to households with incomes below a specific threshold, and rents were determined by the cost incurred by owners (p. 105). This system did significantly decrease the housing shortage, and Germany became a nation of renters. Other factors explaining this fact include “the strong legal protection for tenants, tax incentives to produce and maintain quality rental housing and the relative lack of advantage of homeownership” (p. 105). However, after the reunification of Germany, the reform of the tax law eliminated “the common interest.” “This ended rent control for 3.4 millions rental units and made it possible to privatize the subsidized housing stock” (p. 106). After 2000, especially in the former East Germany, some local authorities began to sell off the “indebted non-profit housing association housing units ‘en bloc’ to U.S. hedge funds and private equity” (p. 107). The result was a “financialized privatization of a significant share of Germany´s subsidized housing” (Wijburg & Aalbers, 2017, cited by the authors on p. 107). In addition to this privatization, “banks also expanded their mortgage lending activities and homeownership increased to 51% by 2017” (p. 107). The net effect was that rents and housing prices increased rapidly, between 2009 and 2018, mainly in Berlin and Munich, making the start of today’s rental housing crisis.

Urban tourism in Germany increased before the arrival of Airbnb, and attracted residents seeking to supplement their income and “investors who turned entire apartments and buildings into STRs” (p. 111). In contrast to Australia, where Airbnb “was welcome with open arms,” in Germany the platform was received “with skepticism and apprehension, particularly in large cities with stressed housing markets” (p. 111). When Berlin became the capital of reunified Germany, the city struggled with various economic problems: job loss, unemployment, population lost, a dilapidated inner-city, and an enormous debt. Consequently, the city authorities sold off a share of its large social housing stock because the inner-city buildings were cheap compared to other European cities, making investment in real estate attractive and safe, for Germans as well as for other Europeans. “Many of this investor-owned apartments were used for STRs” (p. 114). As investments increased, the rents rose too, “from 2008 to 2018, rising 104%” (p. 114). And because wages did not keep up with rent increases (44% of residents paid more than 30% of their income in rent), the net effect was (and is) Berlin’s current housing crisis. With the growth of tourism in the city, and the housing crisis, Airbnb became a hotspot for discussion, debate, and protest. Residents and activists have rallied against the touristification of their neighborhoods, along with the rising rents and displacement.

These negative impacts and the increased concentration and commercialization of the short-term rental sector led to the establishment of the STR Senate’s regulation (the ZwVbG law, i.e., misappropriation law). It was revised in 2018 to ensure that the housing stock in Berlin is used for permanent living only. Because of the increased protests against Airbnb in 2019, Berlin authorities have bought back buildings owned by private companies and passed a new and controversial law Mietendeckel (rental price cap) effective as of January 1, 2020. It freezes rents for 5 years, but newly constructed flats (since 2014) are excluded from this regulation. The social housing stock with its rent-controlled flats is not affected either. Thus, because Germany is a society of renters, Airbnbs have been viewed as extremely threatening, and as a result, strong laws have been passed to protect the most vulnerable residents.

Written in a clear and direct style, this book is suitable for students and scholars in geography, sociology, urban studies, urban planning, housing, and tourism studies. This book has helped me to reflect on the impact of Airbnb on the Porto housing market, a city significantly impacted by Airbnb and STRs. At the time this review is being written, the future of Airbnbs is uncertain, as the Covid-19 pandemic has substantially reduced tourism and has led to the closure of many STRs. However, whatever their future, Airbnb and STRs have become an important part of the housing market and a source of income and business for many.