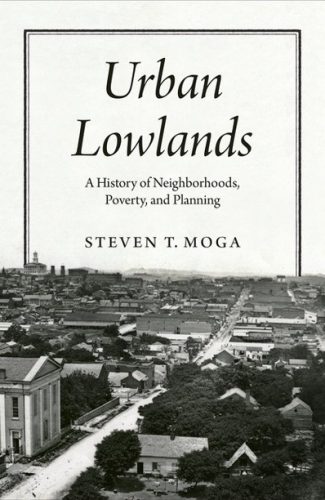 Urban Lowlands draws from city planning history, environmental history, and landscape studies to examine connections between poverty and environment by looking at a particular kind of neighborhood in historical perspective. Throughout it, it emphasizes both the social and physical construction of urban lowland neighborhoods to examine spatial and environmental thinking about urban poverty, race and ethnicity over seven decades of American urban history. The story begins in the bottomlands. (p. 10)

The stories are from examples variously called bottoms, hollows, and flats over the period 1870–1940 in four cities: New York City (Harlem Flats), Nashville (Black Bottom), Saint Paul (Swede Hollow), and Los Angeles (the Flats). Moga focuses on the negative images of these places occupied mostly by immigrants and minorities and typically characterized as slums harboring disease, water problems, and criminal activities. Foreigners included Italians in Harlem, Swedes and Italians in Saint Paul, and Molokans (from the Caucasus), Mexicans, and Russians in Los Angeles. Nashville’s Black Bottom got its name from its mostly African American population after the Civil War.

This book is part of the University of Chicago’s Historical Studies of Urban America. For each of his four comparative case studies, Moga provides a detailed history of the neighborhoods. While each is distinct, common themes are how these neighborhoods evolved from the initial homes of the poor living in areas beset by threats of disease, flooding, and the arrival of railroads, industry, public works projects, and highways. These neighborhoods and their residents were all threatened by displacement, including from forced removal to improve these areas. Moga provides maps of the four areas.

In telling the stories of these places over time, Moga argues:

The history of bottoms, hollows, and flats tells historians and city planners about the places where poor and working-class people lived, the way that environmental problems and poverty were connected by urban Americans, and how racism and xenophobia were deeply embedded in public debates and the purportedly scientific expertise that informed American city planning. (pp. 147-148)

The landscape element of the social construction of lowland neighborhood spaces is particularly striking … .Not only was the American city class segregated, but builders, architects, and engineers molded city form in relation to existing sociospatial patterns. These measures included landfilling, railroad and bridge building, and drain, culvert, and sewer construction. (p. 170)

In recounting the histories of these four lowland areas, Moga believes that their legacy offers lessons about avoiding the historical stigma attached to such places. Ironically, Moga points out the renaming of these places. For example, redevelopment planners renamed Nashville’s Black Bottom SoBro for South of Broadway. The Music City Convention Center is now located in this area.

His concern is that we know just how these areas were affected historically by public and private policies that should be known and not forgotten. No doubt, many readers might relate his concerns to similar areas in their own cities.