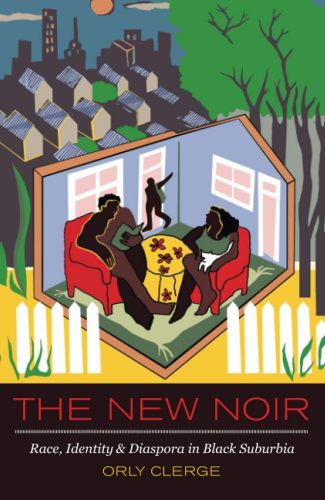 he New Noir: Race, Identity, and Diaspora in Black Suburbia is a refreshingly novel approach to ethnography that offers much about race, class, culture, and urban community-building. The fact that it covers so much analytical terrain, and that it does so in a clear and coherent manner, makes this book a pleasure to read. In producing The New Noir, author Orly Clergé focuses on two communities on Long Island, a unique geographic region made up of parts of New York City and two counties that comprise New York City’s eastern suburbs. As Long Island technically includes the New York City boroughs of Queens and Brooklyn along with the counties of Suffolk and Nassau (the latter two often colloquially regarded as all that constitutes Long Island), Clergé’s effort to cover different communities within this terrain essentially makes her book a multi-site ethnography.

The work is also richly historical as much as it is contemporary. That is, Clergé provides a history of Black migration to the region that begins with the colonial era and extends to the present. She focuses on immigrants from Jamaica and Haiti, and in doing so compares them to African Americans who made the sojourn from the American South to Long Island. Furthermore, the work includes a social history of the geographic communities that she studied (dating back to the 17th century when slaves occupied the territory). There is also a provocative history of the cultural struggles with racial nominations that operate in both the United States and in the homelands of the immigrants. Additionally, the work includes a personal history. Here Clergé informs readers about her own Haitian American family experiences in the communities in which her study is located.

Altogether, then, Clergé works into her analysis the histories of people, places, and types of political struggle to make her case. Her point in bringing together so many histories is to demonstrate how global processes shape Black migrant experiences and the attitudes and worldviews that such migrants have about them. Her own experiences set a foundation for how she sought to understand community-building and collective identity formation for Black families of various ethnic backgrounds. In building upon that foundation, Clergé delivers a powerful account of how racism and agency come together in community-building.

The historical framing is enriched with interviews with 60 residents of these communities. They share with Clergé how they strove to preserve their ethnic heritage, thought about the social significance of race, grappled with being placed into the broader social category of Black American despite the ethnic differences operating within it, and came to terms with their residential communities, which they found to be both inviting and challenging for people like themselves. The point of it all, as Clergé argues, is to provide a deep exploration of how Black immigrants and African Americans arrived in and constructed what she refers to as Black diasporic suburbs.

The chapters of the book are flavorfully titled, quite literally. Each refers to an Afro-Caribbean delicacy: blood pudding, fish soup, callalloo, to name a few. The point of each chapter’s title is to use references to these delicacies as allegorical commentary for some form of historical or contemporary condition or circumstance that pertains to the transfer of Black migrants into the region and the social processes involving their sedimentation into it. In doing so, the work unpacks how nationality, citizenship, and residential community life become interwoven by Black immigrants who have ultimately achieved middle-class status.

The New Noir also unravels the complicated class dynamics that affect many Black immigrants upon their arrival to urban communities in the United States. The class standing that sustained privilege and power back home becomes erased as these immigrants live among themselves and ultimately become identified as members of the African American working and low-income classes that populate their new residential communities. Clergé does an admirable job of demonstrating how Afro Caribbean immigrants feel about this situation and the ways in which they try to draw upon cultural resources to challenge it. These resources include the material capital they accumulate through their professional lives and the utilization of the social networks that such accumulation afforded them.

For those most curious about ethnic diversity in the Black community, Clergé also devotes considerable attention to the views that Jamaican immigrants, Haitian immigrants, and African Americans have about each other, and the extent to which stereotypes, prejudices, and patterns of social interaction drive those depictions. This effort provides provocative instruction about the diversity of outlooks and opinions within the Black experience in America. It also establishes a rubric for how future explorations of that diversity can unfold.

Ultimately, this work portrays the urban community as a site of consistent racial and class contestation. History remains significant for those processes in that the political and cultural histories of both the United States and the homelands of the Black immigrants are argued by Clergé to be complicit in this dynamic. In particular, The New Noir reveals the often-hidden complexities of Blackness in urban communities that may appear at the surface level to be homogenously Black, including how certain cultural aspects of Blackness emerge, become contested, and endure as community life unfolds.

Perhaps because it is so deeply invested in historical analysis, The New Noir provides less substantive ethnographic commentary than is common for work in the ethnographic tradition. That is, Professor Clergé sometimes tends to tell more than she shows in constructing portions of her case. Consequently, there is less than optimal evidence about how the immigrants that she invests so much effort in exploring talk about navigating relationships with White Americans, Black Americans, and other Black immigrant populations. However, the fact that her book is not as focused on traditional ethnographic analysis is more than compensated for by the complex historical foundation that she implicates in her effort to explain what it means for Afro Caribbean immigrants to relocate to and live on Long Island.

The New Noir is a work of urban sociology, migration studies, Black Studies, comparative ethnic studies, and the sociology of culture. As such, it speaks to audiences in each subfield with clarity and focus, yet it blends each subfield into a singular, coherent argument about how to think about the formation and maintenance of multi-ethnic Black urban communities. A final question, which Clergé poses for readers to consider rather than answer herself, is whether Black Americans (including its migrant constituencies) will seek suburbia or traditional central city life. Whatever the path taken, or whichever Blacks follow each pathway, Orly Clergé has provided a critical analytical landscape for assessing race and community life in what that future may be.