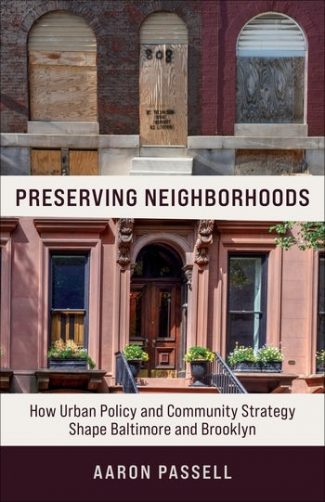 Over the past 40 years, an avalanche of scholarly publications has appeared on the numerous parameters of urban gentrification. Yet, little mention has been made of historic district (HD) designation, a process some critics perceive as gentrification’s coconspirator. Preserving Neighborhoods sets out to untangle strands in the web of misperceptions and uncertainties surrounding this phenomenon.

A central focus in Preserving Neighborhoods is the issue of whether and to what extent HD designation triggers the gentrification process. Passell’s correlation analyses of Baltimore data find “no consistent relationship between designation and other variables across all neighborhoods” (p. 52). In short, none of his metrics “decisively demonstrate a causal relationship” (p. 63). Nonetheless, he notes that HDs evince higher measures of social status, such as the extent of White population, educational attainment, and household income, findings that confirm those in most previous studies of a similar nature. Although Passell concludes that Baltimore’s HDs diverge demographically from similar non-designated areas, the reasons they do so vary considerably from district to district. He concludes that the interrelationships between HD designation and neighborhood change “are variable and seem to be impossible to fully investigate quantitatively” (p. 63).

Comparing a sample of designated areas to others in his undesignated control groups, he discovers that those with significant White working-class populations are more likely than Black working-class areas to experience gentrification. In particular, where educational attainment rises significantly, designation is more likely to follow, rather than lead, neighborhood change. But, as Passell acknowledges, his Baltimore data reveal considerable variability from case to case and little uniformity in outcomes.

Passell’s second city case study yields an interesting contrast to his Baltimore findings. In Brooklyn, gentrification pressures generally preceded HD designation, confounding allegations that designation “causes” or initiates gentrification (p. 67). Accordingly, his Brooklyn research follows a different trajectory. Rather than provide us with another quantitative analysis, he turns to qualitative research. In the book’s Appendix, Passell refers to his employment of mixed methods as “triangulation,” in which he relies on the accumulated weight of multiple observations to render his conclusions (p. 201). Through extensive interviews of informants such as preservation officials and neighborhood activists, plus data on declining crime, racial change, median rents, and housing prices, he explores key mechanisms of the designation process, including the extent to which it mitigates the effects of gentrification. He observes that HD designation serves as one of the few policy instruments available to residents offering an effective margin of control over physical continuity and change in the neighborhood. Whereas in Baltimore, designation may “consolidate status or facilitate changes,” in Brooklyn, he observes, it more often “mitigates change” (p. 113).

As I read this book, I couldn’t help recalling the Clinton-era slogan, “It’s the economy, stupid”; he was, of course, not referring to either study city. To wit: as a global powerhouse, New York attracts capital and human resources like few other world cities. Baltimore, on the other hand, once a thriving industrial center, has lost about 340,000 people or 36% of its population over the past 70 years (p. 115). Yet, to attract households and economic activity, it must compete with its big-city regional “neighbors.” These are Washington, Philadelphia, Boston, and New York—all part of the “BosWash” megalopolis. And in this hegemonic sweepstakes, too often, corporations and other generators of economic growth find locational advantages in those four cities that are deemed superior to Baltimore. Despite its many attractions, Baltimore has been losing much of its economic raison d’etre and flirts with redundancy. As the global economy progresses there are simply not enough jobs, population, or investment capital on the eastern seaboard to revalorize the city’s aging building stock and to boost personal incomes to sustainable levels. Hence, demand for Baltimore housing is far more attenuated than that in Brooklyn. Readers are left to ponder the extent to which observed differences in HD designation are rooted primarily in the vastly divergent economies in the two cities and their effects on local housing markets.

Passell’s research on Baltimore’s HD process leads him to double down on the city’s rampant rate of housing vacancies and municipal demolitions. He reveals a litany of challenges remindful of lessons unearthed by the federal urban renewal program more than a half-century ago. Titles needed to demolish a vacant property may display conflicting or missing information. Separate parties may claim ownership. Distinguishing property vacancy versus abandonment can take years to clarify. Mortgage foreclosure and tax liens can obstruct title acquisition. Furthermore, condemnation proceedings under eminent domain may be stymied if a clear public purpose cannot be demonstrated. Passell’s findings confirm that issues such as these continue to bedevil Baltimore’s efforts to downsize its gargantuan supply of surplus housing.

The book’s concluding chapter reveals some vexation over the considerable variation the author discovered between his Baltimore and Brooklyn study neighborhoods. Although unable to conclude that HD designation does or does not trigger gentrification, his results only permitted him to claim that the limits of his data and methods did not ipso facto reveal a consistent set of correlations. As well, the extreme differences in social and economic conditions between those two cities appear to have raised an “apples and oranges” conundrum, making comparisons suspect. He opines that further research, comparing Brooklyn to Philadelphia, a city whose fortunes are less dire than Baltimore’s, might yield results that shed more light on his research questions.

As Passell observes, one key finding in his qualitative research was the extent to which locally designated HDs foster community cohesion and the development of social capital. Neighbors were motivated to interact socially, share common aspirations, build consensus, and cooperate in achieving mutually supported goals. While these activities didn’t always succeed in surmounting social, economic, or racial cleavages, they sometimes advanced interpersonal cohesion. Passell adds that the designation process varied between Baltimore and Brooklyn. In the former, power tended to flow from government authorities downward to local activists, while in the latter, it more frequently originated through citizen initiation and flowed upward to city officials.

Preserving Neighborhoods contains several statistical graphs, a single neighborhood photograph, and a somewhat confusing map of Baltimore’s Black and White population concentrations. Missing are maps of Brooklyn case study neighborhoods such as Prospect Heights and Crown Heights South, the physiography of which is germane to understanding issues discussed by the author.

Historic preservation activities and policies do not seem to have generated a significant body of published empirical research in urban studies, despite their obvious interactions with neighborhood change in numerous cities. Author Passell joins scholars such as Ryberg-Webster and Kinahan (2014) in plowing this terrain for new insights on housing policy and neighborhood transformation. One can hope that this trend will continue.