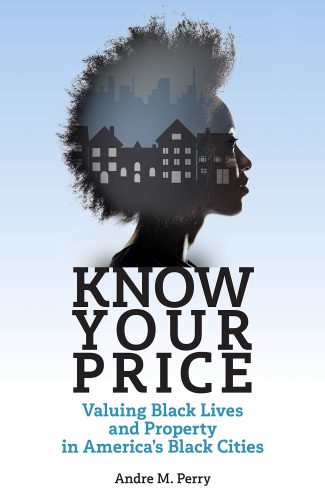 One of the many joys of working in Washington, DC is attending events hosted by think tanks, nonprofits, and government institutions on site, in person. At an event at the Brookings Institution on February 19, 2020, moderator Andre Perry excitedly announced the launch of his book, Know Your Price: Valuing Black Lives and Property in America’s Black Cities, scheduled for May 19, 2020. Unfortunately, the global COVID-19 pandemic forced Perry to pivot to launch his book online. More importantly, the pandemic has disproportionately affected about 9 million Blacks, approximately 20% of the country’s Black population. Many live in Black-majority cities, six of which discussed in detail in this book.

Perry argues that historic racist federal, state, and local policies, such as racially restrictive covenants, urban displacement, redlining, predatory lending, and environmental racism, among others, have devalued majority-Black neighborhoods by an average of $48,000 per home, controlling for many factors, which has resulted in $156 billion in cumulative differences compared to other neighborhoods, and has limited opportunities for upward mobility (Perry et al., 2018). He points out that conventional variables, such as the number of bedrooms or the number of bathrooms, only explain 50% of the devaluation, leaving the unexplained remainder to racial and ethnic bias and discrimination in policing, employment, education, and other fields (Perry et al., 2018).

In Know Your Price, Perry critiques Oscar Lewis’s concept of the culture of poverty by writing that “there is nothing wrong with Black people that ending racism can’t solve” (p. 10, italics in original). Perry argues that most researchers and policy analysts generate results based on frameworks and methods that are influenced by cultural norms and traditions, which are in turn influenced by the “racial setting” (p. 14). He argues that because many researchers and policy analysts focus on disparities between non-Hispanic Whites and Blacks, helping foster a sense of superiority among non-Hispanic Whites. More specifically, he states that “[c]ommunities burdened by racism don’t need comparison studies that, in essence, suggest they have to catch up to or become White” (p. 17).

Perry argues that researchers and analysts should instead focus on historic policies that were designed to devalue Black assets in the first place. He states that “[d]isenfranchised groups need studies they can use in court to litigate against discrimination; information that can be used to build wealth; knowledge that reveals the erasing of history; and inquiries that dismantle racism systems” (p. 17). To limit the historic effects of racism, he suggests that the value of Black communities should be properly determined through a new means of empowerment consisting of intrinsic personal strength, real property, and traditional institutions. To discuss the assets in Black communities, Perry utilizes topical literature reviews, descriptive analyses, and expert interviews (although the specific number is not reported). Although there were most likely more, he bases his discussion on two disclosed questions. First, what are the benefits to living in a Black-majority city? Second, why do so many Blacks choose to stay in them?

Know Your Price, which has an introduction and eight chapters, is “part memoir, part essay, and part cri de coeur, with a splash of ‘dispassionate’ analysis, varying in degree” (p. 23, italics in original). In the introduction, Perry discusses his analysis of 2015 American Community Survey (ACS) data, which is the basis of a subset of Black majority cities that he ranks, finding that 124 Black-majority cities, many of them in Maryland, surpass the national median household income for all races ($53,889). In the following chapters, Perry discusses select topics through the lens of past and current discrimination and racism, focusing on select cities but also national trends.

In Chapter 1 (Who Runs the City), the author discusses discrimination and local economic development in Wilkinsburg, Pennsylvania (a small city east of Pittsburgh, his hometown). In Chapter 2 (A Father Forged in Detroit), he focuses on discrimination in employment and the housing market in Detroit, Michigan, but also the nation. Chapter 3 (Buy Back the Block) is about discrimination in past and current real estate and community development in Black communities, including Birmingham, Alabama. In chapters 4 (A Different Kind of School) and 5 (The Apologies We Owe to Students and Teachers), Perry examines discrimination in education in New Orleans and Atlanta, respectively, as well as elsewhere in the nation. Chapter 6 (Having Babies Like White People) is about discrimination and racism influencing infant and maternal mortality rates, fertility, and healthcare. Chapter 7 (For the Sake of America, Elect a Black Woman President) is about discrimination affecting the Black vote and representation, honing in on Mayor Keisha Lance Bottoms of Atlanta and Stacey Abrams, former member and then minority leader of the Georgia House of Representatives and 2018 Georgia gubernatorial candidate. Finally, Chapter 8 (“This city will be chocolate at the end of the day”) is about Washington, DC.

This book presents many ideas for future discussions and research. First, as stated above, Perry believes that most researchers use culturally based frameworks and methods to generate findings (p. 14) and that they are professionally trained and rewarded to make non-Hispanic White people the default “referent” group against which Blacks are measured (p. 10). However, between these two statements, he states that “referent” models are mathematically most stable if the “referent” group is the largest group within the sample from which one is drawing (p. 12). As many major U.S. cities are majority non-Hispanic White, making another group besides non-Hispanic Whites (the largest group) the reference group may pose some statistical challenges. In the introduction, Perry writes that 124 cities were majority Black in 2015. Thus, future regression analyses on these 124 cities (or an updated number) could use Blacks as the reference group. Positive coefficients may then show that non-Hispanic Whites and possibly Asians are doing better than others. Does this then mean that (rigorous) regression analyses are less useful for Perry? If so, what statistical method(s) would be more useful to answer Perry’s charge?

Second, Perry suggests analyzing the variation within the Black population “to see what factors and conditions can be attributed to differences” (p. 12). This is an interesting suggestion. Variations within the Black population may be analyzed through minimums, maximums, ranges, and possibly quartiles, quintiles, or percentiles, but the factors and conditions that may be attributed to these differences within a Black subset may be analyzed through regression analysis. Because conventional regression analyses center on the mean, what statistical method(s) should then be chosen for this task?

Third, Perry also suggests having more robust measures of economic health that include growth, inclusion, and prosperity (p. 13). This is a great idea. However, this reviewer wonders how growth, inclusion, and prosperity should be defined, operationalized, and conceptualized to answer this call. Would growth be the increase in the number of people, housing units, jobs, or some other factor? While inclusion studies are rare, residential racial and ethnic segregation studies are more common. Would prosperity be monetary or nonmonetary equity (assets minus debt)? What data sets, variables, and methods should be utilized to implement this suggestion?

Fourth, Perry states that “the methods and perspectives researchers are trained to use must also change if we are going to add value to communities that have been robbed of vital resources by racism” (p. 15), “[d]isenfranchised groups need studies they can use in court to litigate against discrimination” (p. 17), and “[w]e need the tools, analytics, and frameworks to properly assess the cities, neighborhoods, and people others devalue” (p. 19). Indeed, many discrimination studies have already been published. For example, in 2012, Turner et al. published Housing Discrimination against Racial and Ethnic Minorities, based on extensive paired testing. In 2017, Rothstein published The Color of Law: A Forgotten History of How Our Government Segregated America, on a years’ long archival research. What other (historic) data sets, methods, and studies are needed that can be used in court to litigate against racial and ethnic discrimination?

This book has a few aspects that could be clarified in a future edition. First, the six analyzed case studies seem to be among the 124 Black-majority cities, most of them in Maryland, although the link between the six and the 124 is not further discussed. Perry may have chosen the six case studies because of his deep connections to these communities, as stated on the front flap and indicated in the acknowledgments and throughout the book. Second, the six cities seem to include five major cities, with populations ranking from about 705,000 (Washington, DC), 670,000 (Detroit), 506,000 (Atlanta), 390,000 (New Orleans), to 210,000 (Birmingham), and one small town, with a population of about 15,000 (Wilkinsburg) in 2019 (U.S. Bureau of the Census, n.d.). To some, the latter community may appear to be an outlier. Third, Perry states that “[t]he establishment of the interstate highway system in 1956 literally paved the way for White flight to the suburbs” (p. 49). Some may argue that White flight was already in full swing by 1956, fueled by the passing of 26 U.S.C § 163(h) of the Internal Revenue Code, which allowed the deduction of property taxes as well as interest on mortgages (in 1913), the passing of the Federal Housing Administration (FHA; in 1934), the establishment of Fannie Mae (in 1938), the Servicemen’s Readjustment Act (GI Bill; since 1944), and the innovations in construction and housing finance by the Levitt Brothers, all of which facilitated non-Hispanic White homeownership. Fourth, Perry states that “the old redline maps—[were] employed by the Home Owners’ Loan Corporation (HOLC) from 1933 to 1977.” Some may argue that HOLC was liquidated in 1954, but the Community Reinvestment Act (CRA) was passed in 1977.

In sum, Know Your Price: Valuing Black Lives and Property in America’s Black Cities provides many suggestions about paying reparations to people who have been robbed of opportunities and wealth and uplifting challenged communities that have been targeted by past racist policies, as exemplified by Georgetown University. Suggestions include a so-called small-dollar mortgage market for lower-value homes and tax credits to enable homeownership for many, including millennials. The current administration will hopefully appreciate at least some if not all the suggestions discussed in this book, in Perry’s future work, and during future events on site, in person.