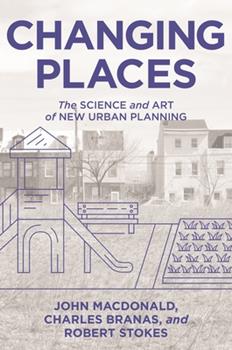 This book claims distinction in that it aims to bring back science into the art of place making. Its projected audience is for policymakers with no specialist research expertise. In this regard, it may not be suitable for readers of this journal, but it may be that readers would recommend it to policymakers who commission research.

The book’s aim is to demonstrate the importance of place to policymakers. In this, as the book acknowledges and discusses, it is returning to a long tradition in urban planning that makes connections between urban planning, health, and well-being. Such an emphasis on reestablishing the human qualities of place and ending the destructive impacts of urban sprawl and car dominance has now become an accepted part of planning practice. Nevertheless, the authors set out a strong set of arguments explaining why place matters and the influence it has on our lives in their opening chapter. They acknowledge the historical antecedents of these ideas in their second chapter, but highlight the contemporary resonance to New Urbanism, active living, and crime prevention through environmental design.

There are many reasons why researchers could encourage local government officials and politicians to read this book. First and foremost, it is written in a clear and accessible style; plain English is used throughout. The most useful chapter is the third, which discusses how to examine evidence and claims for the impact of any particular urban intervention. This chapter has a very good explanation of the methods used in the natural sciences. The authors explain the importance of randomized control trials, which they champion as a gold standard in research. The explanations offered in this chapter would also be helpful to a student audience. Sadly, this task may have been made easier by the global pandemic, as citizens’ awareness of scientific debate has increased.

The subsequent four chapters examine different types of urban intervention which form part of the approach to the “new” urban planning. These include some interesting examples which have received little attention in the urban studies literature. For instance, a decade ago in Philadelphia there were over 40,000 boarded up properties. An ordinance requiring owners to install doors and windows led to measurable decreases in serious crime and made a significant contribution to quality of life for citizens. Similar positive results were also achieved in the same city through the removal of hurricane-style fencing and subsequent greening of vacant lots. Other interventions such as the impact of light rail, business improvement districts (BIDs), and planting trees have received more attention elsewhere, but the authors’ rigorous evaluation of the evidence provides guidance for the types of questions that policymakers could ask.

A penultimate chapter on the unintended consequences of urban interventions expands the considerations for non-specialists even further. The authors make the salient point that while considerable investments in light rail systems were not intended to tackle the health problems of obesity, there is strong evidence to demonstrate that this has been an unanticipated benefit. Conversely, the problems of gentrification associated with urban improvements are also given an airing, although this of course has been widely recognized in the urban studies literature and by campaigners.

This point leads on to the more difficult aspects of the book’s argument. While policymakers and public debate can draw on the exacting methodology of the natural sciences, such a reliance on rationality can evade other qualities of the built environment. The Black Lives Matter movement’s toppling of statues of historic figures who profited from the slave trade demonstrates the power of symbolism and historic reference. While the rational science of large-scale randomized control trials is useful for interventions which, ironically, have a loose relationship to the particularities of place, they have less to offer where specific histories and geographies are involved. To expand this point, where there are sprawling “cookie cutter” suburbs, reproduced across the same metropolitan region, it is relatively easy to find control areas to test out hypotheses and correlations. This becomes significantly more difficult with cities with an ancient core, centuries old, and different phases of urban development that have shaped their urban form. In these places, the methodology of the case study is more commonly employed.

The authors among them have expertise in criminology, health, and public policy. For a built environment specialist, some of the commentary is frustratingly thin. The discussion of whether cul-de-sacs serve to reduce crime, for example, does not cite or consider the considerable debate on the topic published more than 10 years ago (Cozens & Hillier, 2008). Indeed, space syntax, which can claim to be generated by scientific concepts and methodology, does not rate a mention (Karimi, 2018).

A further problem thrown up by built environment research, which is somewhat elided in this book, is the dynamic of urban development. Where an economy is vibrant, places can change very rapidly, making difficulties for neat “before” and “after” studies. The key stakeholders in the property industry mold and shape change, banking land to create development opportunities, and anticipating the results of development in advance. This book, written from a socially liberal perspective, discusses gentrification but brushes over the powerful interests invested in creating value through land and urban development. These powerful forces are players in the grotesque inequalities which afflict civil society. Instead, the authors make an argument for incremental changes to improve places and reduce inequalities. Redistribution is discussed so tentatively, for example, that developers could even be required to provide social housing, that it is scarcely on the agenda.

Notwithstanding these criticisms, the authors do make a series of convincing arguments about the importance of place, of evaluating evidence, and for anticipating, as far as is possible, “known unknowns.” For this reviewer, one of the book’s key strengths is that there is no argument for checklists, traffic light systems, or any of the technocratic and bureaucratic means that policymakers frequently deploy. The authors make tougher demands for practitioners to go beyond facile precedent studies to justify their proposals. Instead, they call for a deeper, more critical engagement that looks behind hyperbole, mission statements, and visions to uncover what may be unwelcome messages.