Journal of Urban Affairs > Book Review > The man in the dog park: Coming up close to homelessness, by Cathy A. Small with Jason Kordosky and Ross Moore 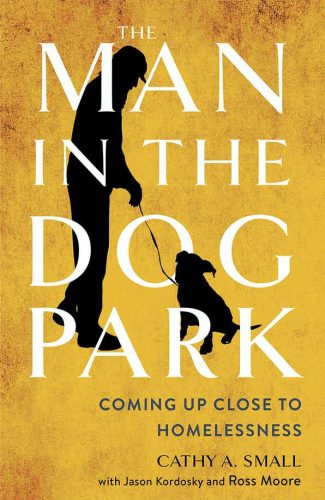 As she was walking her dog in 2008, Cathy Small, an experienced anthropologist but not an expert on homelessness, meets Ross Moore, a man who had lived on and off in shelters, doubled up with relatives, in the forest, and in welfare motels. Over the next several years, Small became a witness to Moore’s quest for subsidized housing and his many strategies for survival as a chronically poor person. In addition to Moore, Small and her research assistant Jason Kordosky interview more homeless people in a small city in Arizona and “unpacked” what led the people into their current state of homelessness.

The strength of this book is that Small takes us with her on her journey of discovery about homelessness. Small is honest about her lack of knowledge of life on the edge, where an illness, accident, loss of job, having the landlord sell the building, or family crisis can push a poor person into homelessness. Small calls this the slippery slope of our social structure, wherein whatever safety net the U.S. has is often in tatters as benefits are reduced and challenged. Our lack of universal programs means that the poor spend a great deal of their time applying for individual programs in order to piece together a package for survival. This is in contrast to the European model, which seeks to ensure that the working class do not become impoverished.

Ross is a wonderful cultural interpreter as he explains to Small how he became homeless and how he started to identify as a homeless person. His description early on of how he is careful not to approach strangers before they approach him, because he doesn’t want to scare them because of his rumpled appearance, is reminiscent of George Orwell’s description of himself as he was homeless in the streets of London in the late 1920s (Orwell, 1933). Orwell had just bought some secondhand clothes and saw a “tramp” coming toward him menacingly as he looked in a store window. Of course, the “tramp” was Orwell, who hadn’t recognized himself in the window’s reflection. So too Ross quickly becomes conscious of his own potential to cause alarm by his appearance.

Small asks questions that many ask, such as why do homeless people spend money on storage units? Why would anyone work for a day labor agency that keeps such a large percentage of one’s wages? Why don’t people set up bank accounts instead of paying for a check cashing service that charged Ross 3% of the check to cash it? Through the voices of the people she meets as well as her succinct summaries of the most recent scholarship on each topic, Small answers the many questions she has.

The Man in the Dog Park would be an interesting companion reading for university students in anthropology, urban studies, and related fields who are interns at homeless-serving organizations. They could compare their own insights with Small’s as she seeks to understand some of the common paradoxes of life in shelters and on the streets.

I recall a student of mine who had proposed a program for people living in shelters to move to a city 1 hour away where there were jobs in high tech fields. After the student spent a few weeks helping people with their resumes in a large homeless-serving organization, she realized how difficult it would be to leave one’s support network for a new city and she understood the level of computer skills that the new jobs would require. The student became more invested in helping people with the careers that they themselves wanted.

The chapter “A Sheltered, Homeless Day” takes the reader on the journey from getting into a shelter at 4:30 on a cold winter day, to the strict rules about food, showering, assignment of beds, lights out and then rising at 5 a.m. Since homeless shelters are conceptualized as “emergency shelters” and do not often have the space nor the staff to let people stay all day, there is a storybook quality to them wherein, like Cinderella’s coach that becomes a pumpkin again, the shelter returns to being an empty church basement during the daytime. In the 40 years since the dismantling of welfare in the U.S. and th e emergence of shelters for those who no longer have rent money, we have not evolved to providing either enough affordable housing or temporary humane housing for the unhoused. The details that Small provides of life in a shelter makes it clear how shelter living lacks dignity and respect for the individual.

I was surprised that The Man in the Dog Park does not have a list of references in the back. This makes it difficult for the reader who wants to see the sources of Small’s research. Small does have extensive notes in the back of the book, related to each chapter, wherein she cites current research on homelessness, affordable housing, and topics that she references in her chapters.

As someone who teaches the anthropology of homelessness, I would have liked the details of Small’s IRB-approved methodology to be included in one of the first chapters so that we could discuss the various strategies and ethical concerns of working with vulnerable people. I also believe that the four portraits of people experiencing homelessness in Chapter Two needed to be introduced in the context of how they were interviewed.

One of the most important insights of The Man in the Dog Park is how fluid the concept of homelessness is. Sometimes, Ross and his wife Wendi live in the forest, sometimes in a shelter, and sometimes in an affordable apartment wherein they pay 30% of their income on the rent. Sometimes they live apart from each other, Once in their apartment, life for Ross and Wendi greatly improves and they are reunited with their furniture which makes everything feel like home. However, they still can’t relax as they realize that the rent in their apartment is being raised and the subsidy no longer covers the amount over the 30% of their income they pay. This means that each month they will have to cut back on necessities to pay the rent.

At the end of the book, as Small is volunteering at a shelter, she finds herself saying to a shelter guest: “There but for the grace of God go I.” But then Small stops and questions herself. Is this really true? As someone with social capital, would I really become homeless?