Journal of Urban Affairs > Book Review > South Central is home: Race and the power of community investment in Los Angeles, by Abigail Rosas 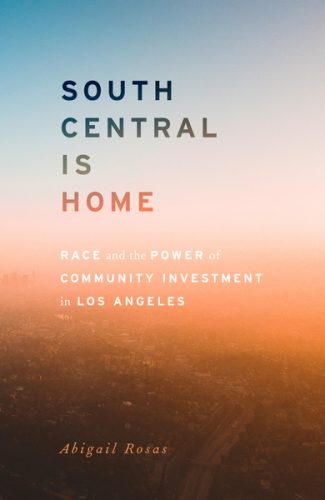 In South Central Is Home: Race and the Power of Community Investment in Los Angeles, Abigail Rosas methodically links systematic racism to pervasive inequities negatively impacting civil rights, healthcare, education, and human rights. Rosas expounds upon the interracial relations of communities of color as demographics shifted during the 1960s and how events in South Central Los Angeles became a source of the civil rights movement. Her focus on African American and Mexican immigrant relationships in South Central Los Angeles portrays the complicated dynamics of forging a collective power.

Rosas (2019), who calls South Central home, defines a counter-narrative of the stereotypical community defined by ethnicity and negative media attention. Prior to the arrival of Mexican immigrants to the area, South Central was a blanket term for all of African Americans in Los Angeles. While the world saw South Central this way, the area was transforming demographically, from Black to a mixture of Blacks and Mexicans. The emphasis of Rosas’s work details the unfolding of and the ways in which collective agency advanced racially distinct communities to coexist, while centering on the hard lessons of inclusion. She argues that both African American and Mexican immigrants have lived experiences of oppression and struggles, and not until they create multiracial spaces of grievance, investment and solidarity can they thrive on collective possibilities. Rosas notes that African American and Mexican residents in South Central “came to realize how they are similarly racialized and must create spaces of possibility in the wake of devastation formed by racialization and discrimination” (p. 13). As a result, they see themselves as one community and their collective efforts have helped transform their space.

South Central Is Home is told over seven chapters. In the Introduction, Rosas describes the methods she used to highlight the story of her community. She used data from newspapers, government reports, and, most importantly, oral life histories. These oral stories are found throughout the book. Rosas attempts to provide a personal account of the historical events that influenced the transition from one community of color to a mixture of the two groups. In Chapter 1, she chronicles how the onset of post–World War II deindustrialization stalled job opportunities for many of South Central residents. She next discusses the War on Poverty and the creation of Broadway Federal Bank. Chapters 2 and 3 highlight two concrete programs emanating from the War on Poverty: Head Start and Community Health Centers. These two programs were critical in the formation of the interracial community of South Central. It was the daily interactions in those interracial places that led African Americans and Mexican residents to volunteer in Head Start programs and to collectively challenge the racial status quo.

In working-class communities of color, both education and working-class solidarity are tools necessary on the path toward collective self-determination. Chapter 3 highlights that doctors and hospital systems tend to serve only those who are more “Americanized” rather than addressing the structural inequities regarding nativism, xenophobia, access to multilingual services. The author makes the case that patterns of medical services were inherently racist.

In Chapter 4, Rosas provides us with the stories of several Mexican immigrant women and a Black resident of South Central. The narratives reveal the motivations of micro-aggressions toward Mexican Americans by African American residents. The African American women did this because they needed to do so in order to become “bona fide residents.” Subsequently, the women were able to relate to one another. As Rosas states, “once they realized their similarities, they extended their goals to their neighbors and community at large” (p. 123). For these women, power was centralized in their bonds as mothers who desired to organize.

In Chapter 5, Rosas describes the way the Creative Workshop in the Head Start classroom provided opportunities for women of color to “transform these racialized courses into a space of opportunity for their educational development” (p. 128). In this chapter, we learn how parental involvement can move beyond volunteerism to active participation in the practice and development of the curriculum. The women were able to analyze the structural and systemic oppression they experienced. Rosas reminds us of Freire’s (1970) pedagogy to understand the hegemonic forces for liberation where the community of South Central came together in the struggle for belonging and justice.

In Chapter 6, Rosas illuminates the promise of community building when a mayor, a person color, was elected and served five terms in office. During his tenure, Tom Bradley, created a vision that embodied a hub of diversity for the city. His administration became known for its wide-ranging alliances and inclusion of people of color in a predominantly White city. This chapter calls for a reminder of the need to fully embrace the complexity of diverse communities, where color, language, abilities, sexual orientation, are the common acts of representation.

In Chapter 7 and the Epilogue, Rosas draws on the current demographic shifts is South Central from predominantly African American to Latina/o, and how the many years of disinvestment in this community have fully weighed on the shoulders of residents. Achieving the full promise of urban areas rests on the collective work of communities of color. Authentic education calls for the communities of color to recover and reclaim what has been erased from their own rich histories and knowledge. Diverse communities represent their own framework of cultural sustainability and respect, and offer people of color the foundation of self-love. This self-love, when combined with the development of a critical consciousness, lays fertile ground for self-determination and collective advocacy. Rosas presents as authentic and organically real the messiness and promise of interracial relationships in South Central.

Organizing communities of color, and the working class in solidarity is the way to build these communities’ collective power for self-determination. As Martin Luther King Jr. said, “the labor movement was the principal force that transformed misery and despair into hope and progress,” (King & Honey, 2012, p. 101). South Central had become known as the “heart of Black Southern California” (p. 6) in which African Americans constructed a Black identity tied to geography. Rosas presents the experiences of Mexican immigrants into South Central to help us better understand the changes in the racial landscape, and the many opportunities for transformation. South Central is Home covers many of the issues found in interracial urban communities across America, and offers us a better understanding of the notions of race, community and place. This book adds to the growing body of literature on social and racial justice, education for emancipation, and the culture of poverty.