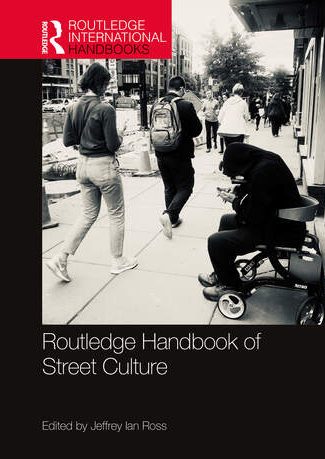 In the aftermath of the 2011 Middle East uprisings, Saskia Sassen imagined a newly birthed “global street” emerging as a home for the powerless. The street is a space where the people’s defenselessness becomes complexly intertwined, creating political possibilities and the formation of a new civic body within the space of the city. The bodies jammed into Tahrir Square, after all, revealed a new expression of resistance, formed on the street, with historical, cultural and political roots that dig deeply within Egyptian quotidian materiality. While Western reportage has examined the Arab Spring as a passing season, other scholars have rightfully pushed back on the terminology, showing the continual and various formal and informal socio-political movements that cannot be categorized within one distinct time frame. In other words, to understand where the 2011 uprisings emerged from—and where they are headed—one must keep a continuous eye on the streets.

The Routledge Handbook of Street Culture not only keeps a watchful eye on the street but, through its large looking glass, creates an amorphous infrastructure to organize and reveal what it sees. Jeffrey Ian Ross, the editor, attempts the herculean task of taking an ambiguous and wide-ranging concept—street culture—and exploring it from multiple angles, depths, and heights. Like all handbooks, it is not the last word on the subject, but a (new) starting point. Reviewing the 30 articles that focus on various manifestations of street culture from numerous countries and academic disciplines, requires a consistent undergirding of why explorations of street culture matter. That is, the street is alive with numerous contestations of people, styles, and interactions. To study the street—and those who interact with it—is to explore the often-marginalized cultural productions that nevertheless seep into a nation’s thoughts through media representations.

Streets, though, are different, and the street culture in Birmingham, England, is not the same as the one in Birmingham, Alabama. Interpretations of streets are also mediated—an American understanding of street culture is filtered through the ideological lens of neoliberal individuality (and the 30-plus years of attacks on safety nets), which will certainly be a different view of a street than in Sweden with its social democratic framing. In other words, does this handbook risk universalizing “street culture,” elevating some, while making others invisible? The answer is simple: of course—because that is the nature of handbooks and collections. Luckily, the articles that Ross chooses and, frankly, his honesty about what he can and cannot do throughout the whole collection, allows for the book’s central topic—street culture—to never be concretely defined. Nor are the “answers” discovered within the chapters presented as a final word. In fact, after finishing this collection, I didn’t feel as if I had a stronger understanding of what street culture is than when I began reading. What I do take away from the book instead are different frameworks to think about street culture and 30 essays that help me see specific historically and place-based street cultures in new lights and through various methodologies. The handbook does not try to be the last word (or even the first word—there is great historical discussion of previous generations of scholarship on street culture in the forward by Peter Manning). Rather, it wants to have a word with the reader, excitedly explaining some particular insights, while gesturing outward to other subjects that still need exploration.

To help (loosely) frame the chapters together, the collection is organized into four parts: “Actors and Street Culture,” “Activities Connected to Street Culture,” “The Centrality of Crime to Street Culture,” and “Representations of Street Culture.” Ross introduces the sections with a clear summary of each of the chapters as well as a section on “omissions” explaining other possible inclusions that could have been made in the section. Within each one, there is a wide range of articles: for example, in the first section, Daniel Briggs’ chapter on Roma street culture is soon followed by Ricardo Campos’s chapter on the intermixing of virtual and physical youth cultures. Part 3, while exploring general connections between the street and crime, contains an assortment of topics: Timothy Lauger and Brooke Horning’s chapter focuses on gang culture, which is followed by Simon Singer’s discussion on suburban delinquency, which is followed by Karen Flynn and Mark Fleisher’s article that rejects the label of “Street Culture” all together.

So Ross creates the framework for these four sections, and then the articles push back. The result is that, as a reader, I was able to slip into each of these articles without a forced preconceived notion of what I should be looking for and, instead, became lost in excellent scholarship that introduced me—or reminded me—of various aspects of street culture. Some of the chapters, such as Ben Sickle’s chapter on street scavengers or Ian Borden’s chapter on skateboarders, offered overviews of the topics with short clear internal sections that discuss terminologies and aspects of a particular culture, including the legality and processes of various street practices. Others were more exploratory, like Helen de Burgh-Woodman’s theoretical exploration of the assemblages between luxury goods and the street or Christopher Mullins and Daniel Kavish’s chapter on the reciprocal relationships between street life and masculinities, that relied more on theoretical arguments about cultural representations.

All the chapters have their merits, and dipping into each one allowed me to create a mental map of subjects that I would love to explore further down the line. But as readers, we drift toward material in which we have worked previously, and I was impressed by the chapters that dealt with graffiti in its various manifestations. Stefano Bloch and Susan Phillips’s chapter linking graffiti, crime, and street culture is a particular standout, and G. James Daichendt’s article on the street art phenomenon raises important questions about what some have defined as an era of “post-graffiti.” That is one of the charms of this collection: it introduces you to aspects of street culture that you might not know a lot about while also reintroducing subjects that you do.

The Routledge Handbook of Street Culture is an excellent addition to Street Culture Studies—a wide, amorphous, and sometimes contradictory field that speaks/argues across disciplines, methodologies, countries, and ideologies. Ross, who as an editor has a knack of corralling large projects together (I have worked with Ross on editing projects and found him to have a steady, deft hand to guide projects to completion), has added to the discussion of street culture by not trying to do too much. Instead, he invites you to take a seat on a stoop and keep your eyes and ears open.

Previous PostThe Great Migration and the Democratic Party: Black voters and the realignment of American politics in the 20th century, by Keneshia N. GrantNext PostThe man in the dog park: Coming up close to homelessness, by Cathy A. Small with Jason Kordosky and Ross Moore
0Shares
Book ReviewVolume 43: Issue 9 (2021)