Journal of Urban Affairs > Book Review > The Great Migration and the Democratic Party: Black voters and the realignment of American politics in the 20th century, by Keneshia N. Grant 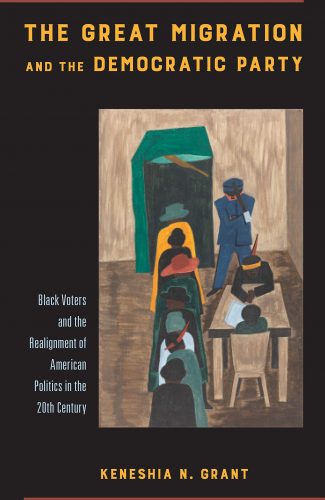 Keneshia Grant has authored a valuable contribution to the already rich body of scholarship on the Great Migration. Focusing on the relationship between northern migration and Black political participation in Detroit, New York, and Chicago, the questions driving Grant’s analysis are more in line with political scientist James Q. Wilson than journalist Isabel Wilkerson. Specifically, Grant seeks to complicate discourse on party change in political science, which she contends has failed to adequately capture the forces influencing either Blacks’ embrace of the Democratic Party or the party’s growing racial liberalism over the course of the 20th century. While she concedes that many factors condensed into the party’s racial realignment, Grant contends that scholars have generally given short shrift to the influence of demography over the scope of Democratic racial politics.

Focusing largely on mayoral candidates’ interactions with Black voters and the “political involvement” and “policy concerns” of African American office holders, Grant’s case studies of Detroit, New York, and Chicago offer particularly useful windows onto the complexities of African American political mobilization and Democratic politics. From the 1920s through the 1960s, Blacks exerted widening influence over mayoral and local races, as their share of the population of each of these cities inched toward the electoral Balance of Power (BOP).

The “Black vote’s” impact on mayoral races reflected both demographic trends and the strength of extant political machines. Due to their numbers and institutional constraints, African Americans in Detroit exerted less influence over the city’s mayoral races than did their counterparts in New York and Chicago, at least prior to 1961. As early as 1924, coalitions helped Blacks leverage concessions from city hall on issues such as police brutality and housing discrimination. New York’s Tammany Hall attempted to incorporate Blacks into the city’s Democratic machine early on. Since Tammany Hall’s coalition politics enhanced Blacks’ electoral leverage, the city’s Democratic mayors rewarded African Americans with political appointments and public sector employment during the 1920s. During the New Deal, New York’s African American voters flooded into the Democratic Party, a transition that coincided with Tammany Hall’s collapse. Chicago’s ward system likewise afforded Blacks meaningful political influence. Indeed, according to Grant, Blacks could have held the BOP in six of 13 mayoral races between 1915 and 1965, which often translated into patronage.

One might expect that the Depression decade represents a pivotal moment in Grant’s analysis. In national elections, Blacks would abandon the party of Lincoln for the party of Roosevelt in 1936; however, Grant’s case studies reveal the complex issues shaping Blacks’ political participation. Indeed, at the local level, African Americans showed an impressive degree of sophistication, casting ballots on the basis of issues that impacted them rather than simply voting in accordance with partisan attachments.

In Chicago, for example, African Americans were reliably Republican through the early 1930s. After defeating Republican William “Big Bill” Thompson in the city’s 1931 mayoral race, Democratic mayor Anton Cermak had initially punished Blacks—denying them patronage—for supporting his Republican rival. However, because Cermak hoped to ensure the Democratic Party’s dominance, he established a sub-machine, in the second and third wards, intended to nurture African American support. Mayor Edward Kelly, Cermak’s successor, furthered Democratic efforts to court Black voters. Between 1935 and 1947, Kelly’s extension of patronage to African Americans, along with his public opposition to restrictive covenants, translated into overwhelming Black support. African Americans would not show the same enthusiasm for Kelly’s Democratic successor, Martin Kennelly, whose tough-on-crime policies resulted in significant defections to the Republicans. By 1955, Mayor Richard Daley, Sr. shored up Blacks’ place within Chicago’s Democratic coalition through the 1970s. But while Daley’s Black sub-machine rewarded African American voters with patronage and aided Black elected officials, the Democratic mayor would try to rein in Black voters by the mid-1960s—concerned that the city’s swelling Black electorate threatened his power.

Grant is clear that the power wielded by Black legislators and councilmen was moderated by a host of political constraints. For example, while Black state senators Charles Diggs, Jr. and Cora Brown succeeded in securing passage of Michigan’s Fair Employment Practices law, compromises in committee and on the floor resulted in a bill that deprived the state’s FEPC of the power to subpoena individuals accused of discrimination. Nevertheless, Grant’s claim that Black elected official brought their constituents’ concerns to legislatures, urban machines, and the Democratic Party itself is persuasive.

Although urbanists and many African Americanists will already be familiar with the mayoral regimes Grant covers, her focus on three cities makes this a particularly useful book. Still, her study would have been more satisfying had Grant offered some insights into the forces that divided Black voters. For example, while Grant tells us that as many as 70% of Blacks voted for Chicago’s Mayor Kelly, she offers few insights into what motivated those Blacks who opposed him. Why did the 30% of African Americans who voted for Republicans define their interests differently from those Blacks who had voted for Kelly?

In Racial Democracy and the Black Metropolis (2012), political scientist Preston Smith does not examine the voting patterns of Black Chicagoans in this time period; however, he does explore the intragroup tensions shaping Blacks’ political struggles in the city. In fact, Smith’s discussion of African American homeowners’ mobilized opposition to publicly funded housing for Black defense workers in the West Chesterfield neighborhood—a conflict that took place during Edward Kelly’s mayoralty—complicates the notion of a Black political interest. Fearing the Chicago Housing Authority project would depress their property values, West Chesterfield’s upscale, Black residents tried to stop the construction of homes for blue-collar African American defense workers. Blacks on both sides of this conflict defined their struggle, at least in part, in terms of race. But while each side knew the sting of residential segregation, the impact of discrimination was influenced by the class of its victims.

Even if greater interrogation of the issues motivating Black voters might have strengthened Grant’s study, she has, nonetheless, authored an informative book, which should be of value to both urbanists and African Americanists.