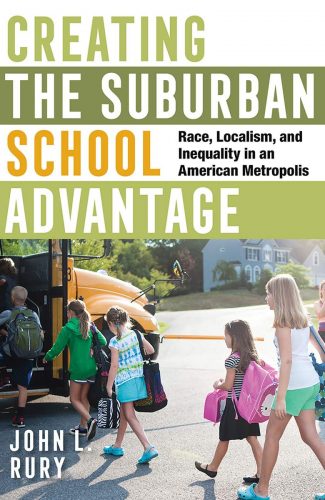 Urbanologists are familiar with the unequal distribution of resources within metropolitan areas in the United States, but how did this inequality arise? And, how is this inequality manifest in public schooling and what shaped it? Historian John Rury has studied the phenomenon of metropolitan inequality for decades and brings his work to a culmination in this comprehensive study of the Kansas City (KC) metropolitan area. Rury analyzes the history of the area from 1950 through 1980 and discusses the dynamics that led to the unequal distribution of school reputation, resources, and student success.

Creating the Suburban School Advantage: Race, Localism, and Inequality in an American Metropolis provides the reader with a detailed, interesting, thoughtful, and disturbing picture of an American city and surrounding suburbs to help us understand who, what, where, why, and how metropolitan inequality developed after World War II. This work raises many questions and considerations well beyond the KC metropolitan area for researchers, policy analysts, and practitioners in fields such as urban affairs, political science, and educational policy.

Rury focuses on the “historical ascendency” of suburban schools which the public believes to be “socially and academically advantageous” (p. 3). Rury analyzes why this occurred,

… focusing on a particular metropolitan area but also placing it in a national context. [This book] focuses on the three decades following 1950, the long postwar era. It was during these years that the perceived suburban advantage clearly took shape. Systematically excluding people considered to be indigent or members of racial or ethnic minority groups, especially African Americans, was integral to this process. At the same time, suburbanites occasionally competed with one another for advantage and influence, roiling the placid settings they safeguarded so zealously. The result was a metropolitan region carved into many different locales, distinguished by gradations of wealth and status and bound by few—if any—shared interests. If there were two issues that everyone became concerned with, however, they were race and defense of local prerogatives. (p. 3)

Rury’s Introduction provides the foundation and rationale for the book, including a discussion of the governing system of American schooling, the lack of interest of historians in suburban schools, the status of inequality in metropolitan areas, and the importance of studying an entire metropolitan area, not just a single school district. Rury indicates that the KC metropolitan area has been identified “as highly representative of national demographic trends” (p. 8) and, because KC was the focal point of the Jenkins v. Missouri U.S. Supreme Court case (1995), there is much historical evidence available to researchers. For interpreting the behavior of suburbanites, Rury introduces the concepts of localism, “a foreshortening of interest and concerns to exclude matters that did not directly benefit a particular community” (p. 12) and opportunity hoarding, “a geo-spatial system of exclusion, typically focused on the segregation of African Americans” (p. 13).

Chapter 1 describes the development of urban and suburban schools after World War II from the “bygone golden age of urban education” (p. 19), where large urban high schools offered a wide array of courses and opportunities, through the decline of urban schools resulting from racism and White flight, segregation, the migration of “impoverished black families settling in ghetto neighborhoods” (p. 28), and the resulting urban-suburban resource gaps. The schools in suburbia flourished and became “settings of educational advantage” (p. 31) while urban schools struggled.

Chapter 2 presents Rury’s description and analysis of the growth and resulting inequities which developed in KC after the Second World War. Under Missouri law, the city did not need approval from citizens in adjacent unincorporated areas for annexation. Kansas City had a city manager who saw the advantages of the city annexing surrounding unincorporated areas. However, these annexations did not include the schools, and ultimately the city included not only the Kansas City Missouri Public Schools (KCMPS) but several other districts as well. Uniquely, suburban sprawl and suburban school districts developed within the city limits. Over time, the KCMPS faced what many city districts faced: overcrowding, segregated schools serving almost entirely Black, low-income students, surrounded by suburban districts serving almost exclusively White students. Uniquely some of these districts were physically within the city boundaries. The result was that “social and educational inequality acquired a geo-spatial form, helping to create winners and losers among the region’s many communities” (p. 45).

The circumstances described in Chapter 3, “Fall from Grace: The Transformation of an Urban School System” (p. 76), will be quite familiar to JUA readers. As the KCMPS struggled to teach students from disadvantaged backgrounds, the district’s reputation declined, White resistance to desegregation increased, White flight from the KCMPS amplified, thus reducing financial resources for the city district. This led to budget and staff cuts and schools serving Black students became more crowded, thereby increasing Black demands for more equal resources. These changes made it more difficult to hire and retain experienced and effective teachers in the KCMPS. In other words, a vicious circle dominated.

In Chapter 4, Rury focuses on three suburban districts on the Missouri side of the KC metropolitan area, analyzing the mechanisms of exclusion that were used to keep the schools primarily White and middle class. Rury discusses the history of attempts to consolidate districts in the KC metropolitan area for efficiency and financial equity. But, like in many metropolitan areas in the U.S., suburban hostility to sharing resources (opportunity hoarding) and the threat of desegregation doomed the efforts. Under the subheading, “Purposeful Racial Exclusion,” Rury concludes, “The prevailing white racial frame in many of these communities depicted African American students as sources of contamination, regardless of their economic status, who could diminish the advantages of local institutions” (p. 131).

In Chapter 5, Rury uses his study of northern Johnson County and the resistance of the Shawnee Mission School District to consolidation to examine the attitudes of highly educated, affluent, White suburbanites to consolidation, even absent the issue of race. Such suburban residents

… heavily favored local control of schools, without state or federal involvement, and were willing to pay higher taxes to support them … For many of these suburbanites, schools became an amenity reflected in the price of a new home, analogous to a membership in the local country club … [t]hese suburbanites had little interest in suggestions that schools should serve such larger purposes as promoting greater social understanding or bridging the racial and socioeconomic divisions that fractured most metropolitan areas. (p. 155)

In the Epilogue, Rury concludes that the legacy of the postwar inequality across the city and suburbs that he analyzed has endured in the KC metro area as well as the nation. “The tendency to favor suburban schools continued to be robust in the 21st century, despite a renewed interest in urban living among younger, well-educated whites” (p. 161). Suburban schools continue to have students who achieve more academically and maintain greater support among the public, and the disadvantaged continue to be served by inadequate city schools.

Among Rury’s contributions is a delineation of the many ways racism played a role in shaping the KC metropolitan area’s level of inequality and suburban educational advantage. For example, his itemization of the “mechanisms of exclusion” (p. 107) includes violence against African Americans, police harassment, racial steering by realtors and the area’s premier builder developing racially segregated developments. He even mentions a case where White suburbanites bought out a Black family that had purchased a home in a White district. Rury notes that the suburban districts, including those inside the city boundaries, had sports leagues that purposely excluded KCMPS teams. He shows how the patchwork quilt of local governments and school districts, based upon local control of funding and racist educational and planning policies, perpetuated the distribution of inequality in this fragmented metropolitan area. “This suggests a purposeful pattern of policy decisions and active exclusion rather than a natural or unintentional geo-spatial arrangement of status and individual choice” (pp. 111–112).

Rury has produced a work of excellent scholarship utilizing a wide range of methods including oral histories (31 from former students, teachers, administrators, board members, and community leaders), newspaper articles, official documents, depositions from the Missouri v. Jenkins case, and statistical techniques such as odds ratio analysis of U.S. Census data. His endnotes are substantive, numerous (N = 646), and draw from multiple disciplines including sociology, history, and education. Rury cites a treasure chest of helpful references. But, I do miss a comprehensive list of references at the end. The citations are buried in the over 50 pages of endnotes and this makes it impossible to find works by a particular author or on a general topic.

Rury’s central research question is clear and is carried throughout the book. In addition, Rury provides a comprehensive introduction to his research, and does an excellent job summarizing each of the chapters and the book as a whole in the Epilogue. (Admittedly, some readers might find these summaries somewhat repetitive.) He presents helpful statistics and interesting vignettes along with thoughtful conceptual issues.

As an overall indication of the book’s value, I think I highlighted more in this book than any other I have read! I could see this book used in many advanced courses in history, urban studies, education (and school reform), political science, and related social science fields not only because of Rury’s documentation of the dynamics of metropolitan postwar development and the resulting unequal distribution of educational success and status, but also because so many paragraphs would be superb for raising questions to initiate a discussion of concepts, methods, and policies.