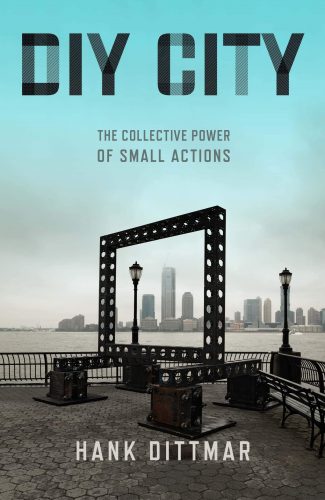 Planners are biased toward big ideas and big plans. Ever since Daniel Burnham inspired us to “make no little plans,” the planning profession has prided itself on transformative action. Planners very much want to “stir people’s blood.” The desire to go big has sometimes yielded great results, such as L’Enfant’s plan of Washington, D.C., and Olmsted’s plan of Central Park. Other big plans were “successfully” implemented, but with disastrous results, such as slum clearance and massive public housing, plans from which we are still feeling the impacts. In any case, planners love to think comprehensively.

Hank Dittmar takes us in a different direction. DIY City is a small book that celebrates the power of small actions. Its 166 pages in nine chapters have a journalistic and frequently breezy style, but his emphasis on small acts is a big idea that should resonate with planners. Dittmar, who died in 2018, left behind a career’s worth of lessons that point to the idea that big is not always better. Small actions taken through individual acts of initiative are just as important to the fabric of community planning and development as are grand plans; in fact, they are often better. “Make no little plans” is a hard ghost for planners to give up, but Dittmar makes a strong case for the small.

Dittmar was a practicing planner and prolific author. As a planner, he served as chief executive of The Prince’s Foundation for the Built Environment in London. He authored Transport and Neighborhoods (2008), My Kind of City: Collected Essays of Hank Dittmar (2019), and coauthored Sustainable Planet (2000) and Green Living (2009). The central idea that he brings from his long and varied planning experience is that much of a city is unused or underused, and a do-it-yourself ethic using small changes and individual initiatives can fill in the cracks and make a big difference in the vibrancy and vitality of cities.

DIY City is organized around a series of case study–style anecdotes drawn from his experience, mixed with refreshing pop culture references. For example, he notes that the rediscovery of city living was driven by young, exuberant people (he credits Seinfeld and Friends for making city living cool), but global capital is now flowing in, driving housing prices up and young people out. A central question of the book is how cities can retain their diversity and vibrancy in the face of global venture capital flooding the market. His answer lies with less top-down thinking and more bottom-up entrepreneurship.

Dittmar argues that many hands making small changes outside mainstream planning improve resiliency and make it easier for cities to adapt to change. He argues that a “do-it-yourself” ethic is a necessary complement to the world of global business and big developers. Large master-planned projects that planners intend as game changers favor corporate developers over small builders and developers, especially when the entitlement process and project financing become complicated and expensive. Dittmar argues that we need more small-scale initiatives that occur organically and incrementally, with less reliance on mega projects.

The do-it-yourself ethic works with what Dittmar calls “slack.” In his use, slack refers to physical capital such as unused warehouse districts that can be used, even temporarily, as living and work space. It also refers to human capital, including young people who use their 20s as a productive transition before starting a career or family. In a twist on the pejorative slackers, Dittmar argues that young people not employed in the traditional sense can still be actively working and productive. Slackers are not people who do not work, rather they are people who do not have traditional jobs.

Dittmar describes slack as the “difference between total resources and those payments or costs required for the conduct of the firm’s business” (p. 85). According to Dittmar, slack plays a stabilizing and adaptive role and should be recognized as a valuable part of city fabric that complements traditional and large- scale real estate development. He argues that the arts are especially likely to flourish in slack places such as unused industrial or warehouse districts. This is hardly news for anyone who has visited art studios in reused industrial buildings, but Dittmar ties it to the importance of small, local, and incremental steps that help retain the vibrancy of cities. Often these are what Dittmar calls “meanwhile uses” or uses that are temporary. Artist colonies in abandoned industrial buildings may serve an important role in city vibrancy, but they may not be permanent.

Dittmar also advocates for more “lean urbanism” to push back against large scale projects in favor of smaller development projects lead by small local developers. Small local projects are made more difficult, so his argument goes, by local land use regulations that are so cumbersome that only large-scale corporate developers with expensive teams of experts can navigate the system. He argues that “the messy life of informality of the small scale” (p. 151) is important in the face of global financing that discourages small-scale local efforts. He believes that the micro can exist side by side with the corporate if we would only let it.

Dittmar’s book offers valuable insight for planners. The idea that communities have slack – both physical and human – with the capacity to fill in gaps with small, organic, and incremental projects is an important lesson for planners who think we need to plan everything. Community systems are resilient, flexible, and capable of operating and thriving without planners micromanaging them. This is a well-deserved dose of humility for the master-planning strain of the planning profession.

However, Dittmar runs the risk of creating a false dichotomy; planners can deal in big ideas while still promoting organic and incremental steps. Resiliency, social justice, creating great places, natural resource protection, and housing equity are big ideas and core planning values. In fact, the planning profession has helped lead the call for local self-sufficiency and sustainability. Planners understand that these big ideas require small steps. Likewise, Dittmar overstates the idea that local land use regulations are designed only for large corporate developers that require zoning experts to navigate the process. There are many communities with strong local developers building great small-scale projects, and this country is full of local public-sector planners who facilitate development reviews in an efficient and fair way.

But these are minor criticisms; his central idea is sound. Planners often try to solve all the problems and in doing so can inadvertently create barriers to small-scale organic solutions. The zest for thinking big can cause planners to lose sight of the need to allow room for do-it-yourself initiatives. Cities have a great deal of flexibility, excess capacity, and “slack” built into them. What Dittmar calls the “collective power of small actions” in the book’s subtitle is an important part of community health and vibrancy, and we should do a better job as planners in respecting and nourishing them.

DIY City is well suited for practicing planners, especially those who are wrestling with planning in an uncertain and unpredictable future. It is also suited for the planning classroom as a complement and counterpoint to the study of comprehensive planning. It certainly opened this planner’s eyes to a different way of thinking about cities.