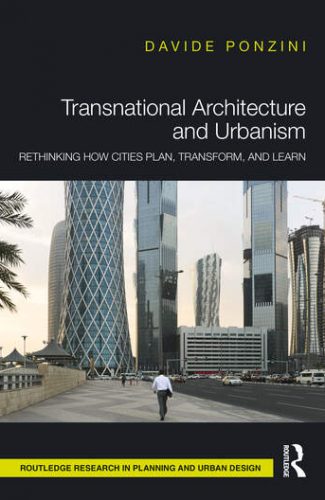 First published in 2011 and reissued in 2016, Davide Ponzini and Michele Nastasi’s Starchitecture: Scenes, Actors, and Spectacles arrived as a balanced piece of analysis hiding in spectacle. Behind the catchy-section headings and Nastasi’s sweeping, almost Neo-Impressionist photographs, was a nuanced argument that carved a middle ground between the celebration of iconic architecture as savior of the urban setting and the reductionist vilification of such buildings as symptoms of the neoliberal system.

Ponzini’s latest, Transnational Architecture and Urbanism: Rethinking How Cities Plan, Transform and Learn, asks many of the same questions and brings the same informed analysis. It begins with a nifty close-reading of a 2006–2007 advertisement in the Financial Times featuring a collection of towers, skyscrapers, and supertalls from financial districts around the world. The buildings are gathered together as if on a single waterfront, the claustrophobic collage of capitalism assuring the reader of the paper’s global reach and arguing for inextricable, and beneficial, ties between the built environment, cities, and global finance. Such simple celebrations and their inevitable accompanying criticisms matter. Whether in the form of theories of deracinated capital flows, narratives of culture-driven urban rejuvenation, or cultish admiration of star architects, Ponzini argues, simple ideas and narratives about cities and urban areas are often wrong and sometimes damaging. “The spasmodic (and mostly motivated by academic goals) search for new and fashionable general theories and metatheories intended to fight against the ideologies of our urban age has,” he writes, “had limited impact on improving (or even avoiding) the kinds of plans and projects analyzed in this book as well as their related urban effects” (p. 289). This balancing act between theoretical debates and the concerns of practitioners is an ongoing feature of Ponzini’s work, and is an admirable, if difficult, one at that.

But gone here are Nastasi’s gripping photographs and the inviting section headings of Starchitecture, replaced by black-and-white images and sections, subsections, and sub-subsections that nod to theory and conceptual frameworks. Ponzini’s concern is with transnational developments in city-making in the last 3 decades, and a vast library on transnational urbanism has emerged to accompany the built environment. A global city could be constructed of books on global cities. If big theories and big ideas not only hide the realities of urban development, but also potentially hinder them, it is to the detriment of the book’s wider project that the first of its three sections consists of an extended tour of the relevant literature and theory. To be sure, Ponzini knows the literature well and each of the four subsections that compose the book’s first 100 pages will likely prove useful to graduate students, researchers, and syllabus drafters. That familiar shuffle between bibliography and text—which the book rewards—speaks well of an author’s familiarity with, and respect for, the literature and colleagues operating across an array of disciplines. But theoretical and conceptual signposting rarely make for gripping reading. And the book’s first section would have benefited from a strong editorial hand. The language can get clunky and the back and forth between potted histories, literature reviews, and provocations reads awkwardly. Sure, there is cheap irony to be highlighted in the disjointed style of a book that foregrounds the power of narrative, but there is a more pressing point: the extended first section risks that readers, especially practitioners, might not persevere to the insightful and provocative second and third sections.

The book’s final 200 pages offer a return to the deep description, global connection drawing, and interdisciplinary analysis at which Ponzini excels. Whereas Starchitecture was composed of deep dives into Bilbao, Abu Dhabi, Paris, and New York, Ponzini here explores a wider array of cities and urban projects in Europe and the Middle East, as well as Central Asia and Africa. The analysis is structured around design projects and built forms, the urban context, and actors and networks, but perhaps most importantly, the interactions between these forces over time.

Unlike the potted histories of the first part, those in the second two thirds of the book seem necessary to understand the global circulation of ideas. Ponzini introduces us to, among others, the UAE-based Emaar Properties and Broadway Malyan, the UK-based design firm that has morphed into a global enterprise, with offices in 10 international cities, including Sao Paulo, Mumbai, and Baku. He reconstructs the movement of narratives, plans, and capital between, among other connections, Abu Dhabi and Astana, Vancouver and Dubai, and Singapore and Chongqing. Many of the case studies are familiar, but even when it comes to much-covered territory, such as with the Guggenheim Museums or New York City’s High Line, Ponzini’s rich descriptions of the processes of exchange are welcome additions to conversations often easily reduced to ideological positioning or esthetic complaints. “Spectacularizaion is not the simple urban manifestation of a new and extreme age of global capitalism,” he writes, “but it is, more concretely, produced by specific actors according to local goals of globalization and diverse ways of accomplishing them, in Dubai and elsewhere” (p. 140). One of Ponzini’s rewarding methods is to compare how building plans “transferred” from city to city—such as between the Torre Agbar in Barcelona and the Burj Doha in the UAE—and in doing so he highlights the effects of politics, developers, and local context.

It is surprising how difficult such knowledge is to come by, but an understanding of the processes of exchange and avenues of influence between the local and global is not merely an academic exercise. To know how narratives, plans, and ideas travel is, Ponzini argues, to be able to produce better projects and even cities. “By understanding these transnational forces and by contrasting any ‘generic globalization’ arguments, one can find room for maneuvering, for selecting better and more place-sensitive projects,” Ponzini agues near the book’s conclusion, “in other words, to make projects better and cities more suitable for different local populations” (p. 242).

Here is Ponzini’s exciting, if perhaps optimistic, route forward: the local can influence, collaborate, and when needed resist the global by learning the lessons of its processes through “thick description,” adaptation and reflectiveness. Anna Greenspan’s Shanghai Future, Lynn Sagalyn’s Power at Ground Zero, Eric Mumford’s Designing the Modern City and To Build a City in Africa, edited by Rachel Keeton and Michelle Provoost, come to mind as recent works of scholarship with which Ponzini’s book might find fraternity. “Cities,” he writes, “can learn from evidence and transfer knowledge beyond the simplified spectacle-fueled pro-growth narratives and beyond the assumptions about one dominant global ideology using such spectacles at the expense of the locale” (p. 121).

Starchitecture pulled off a nifty trick, packaging spectacle—its fantastical buildings, sweeping vistas, and glossy pages—to offer an insightful, balanced take on spectacle. Transnational Urbanism is a different, harder book. It utilizes the thick description of planning details, corporate history, and subtle design shifts from project-to-project to reveal the mechanisms by which urban ideas move transnationally. If Ponzini is right, however, and the remedy to ideological extremes that simply celebrate or condemn variations of capitalism and their myriad buildings is just such description, then it is work well worth doing.