Journal of Urban Affairs > Book Review > The land bank revolution: How Ohio’s communities fought back against the foreclosure crisis, by Jim Rokakis and Gus Frangos 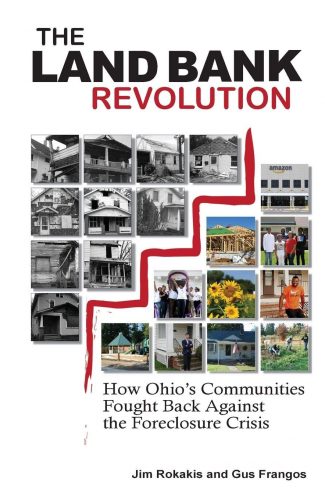 The Land Bank Revolution could be described as both a memoir and a detailed guidebook on the development of a high-capacity, countywide land bank. The book’s two authors are also the primary authors of both a property tax law innovation and the statutory land reutilization innovations that revolutionized land banking in Ohio. From 2003 until 2009, when the Cuyahoga County Land Reutilization Corporation (CCLRC) opened for business, Rokakis was Treasurer of Cuyahoga County and Frangos was a real estate lawyer in private practice and public service. Both served previously on the Cleveland City Council and were familiar with the community’s distress, its fragmented governmental structures, and the consequences of the foreclosure crisis in Northeast Ohio. Together their leadership provided a new agency for “land banking on steroids” in Ohio counties—a valuable example of how to transact land reutilization through a jungle of jurisdictional and bureaucratic structures.

Each author narrates chapters on their respective roles. Rokakis describes the damage done by the rising tide of foreclosures and the abandonment of vacant, tax-dead properties and the failure of government at all levels to respond to this crisis in a timely manner. Frangos focuses in detail first on the drafting process of both the property tax foreclosure legislation and then on the land reutilization legislation. Together these legislative components form the essential core of a countywide land bank on steroids. The book’s 115 pages of narrative includes another 30 pages of appendices and explanatory notes. Appendix B of the book documents the vision Frangos prepared at the outset for a better type of land banking. It describes the necessary structural features and the operational possibilities. This appendix alone is worth the price of the book. It should be noted that the writing style is not academic. It is written to be accessible to readers besides lawyers—policymakers, planners, community and economic development professionals and advocates. It should be studied by anyone looking for how to start and run an effective land bank.

Against a background of traditional land banking that merely holds vacant land with limited financial and transactional capacity, revolutionary land banking is designed with the structure of a public interest corporation having access to a sustaining source of revenue and the ability to initiate, contract, and transact as a business entity rather than as a government department. Ohio’s new land banking authority now enables county governments to establish land reutilization corporations as special purpose nonprofit entities for not only receiving abandoned real properties but also for cleaning up their toxic conditions and unmarketable titles. In addition, it facilitates putting properties back into use in accord with municipal land use policies.

At first, the enabling legislation was limited only to Cuyahoga County as a pilot project. But immediately after it was signed into law in December 2008, other counties clamored for an amendment to be included. That happened within months. New land reutilization corporations are now operating in 57 of Ohio’s 88 counties. Jim Rokakis led that organizational development effort after 2011 when the county government reorganization eliminated the office of elected treasurer. He then joined the Western Reserve Land Conservancy to establish a subsidiary, the Thriving Communities Institute, to promote land banking throughout the state. Gus Frangos became the president of the Cuyahoga County’s Land Reutilization Corporation when it opened in 2009. Since then, his leadership in organizational development and operational management has provided guidance for land banking in Ohio and in other states as well.

Recognizing that county land banking is now indispensible for Ohio’s future, the Ohio County Land Bank Association was formed in 2018 and is chartered to

Its robust website (http://ohiolandbanks.org) shows the engagement of a new generation of land banking professionals with a commitment to continue the advocacy, education, training, and other assistance to keep Ohio land banking at the cutting edge of a wider movement.

Many communities and municipal governments in Ohio and in other Rust Belt states have still not recovered from the land use disruption caused by the foreclosure crisis. Many are already hurting from the immediate economic consequences of the COVID-19 pandemic, which threatens even more housing and commercial property distress. Climate change is an even greater disruptive challenge ahead. More efficient and just land reutilization is a necessary and transformative response to the results of the past foreclosure crisis; it is equally important for the housing and neighborhood property crises in the foreseeable future.