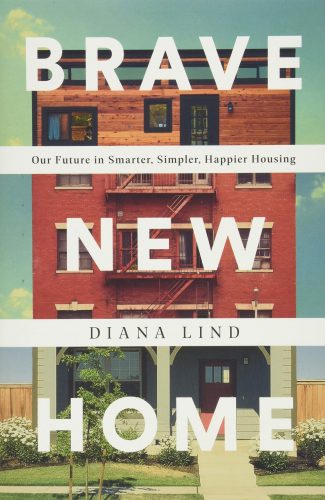 We have been through so much in recent times. The subprime mortgage crisis turned many homeowners into renters. The Great Recession stunted the economic mobility of an entire generation, cramped their access to the housing market, and shifted their prospects from secure corporate careers into “gig” work. The pandemic shifted the workplace from a remote office to working from a home office on a remote internet link. The traditional paradigms of where and how we live (and where and how we work) need to be revisited, particularly from the perspective of the millennial generation, who are struggling the most with these changes. So it was with some eagerness that I picked up Brave New Home by Diana Lind.

She begins with a brief introduction, positioning this book within her own experience as a young mother living in the eastern seaboard megalopolis. The first three chapters rehearse the history of American housing, albeit from the perspective of an urban apartment cliff-dweller. She traces the development of housing from close-packed towns in colonial times through boardinghouses in the 19th century to the apartment hotels and tenements at the turn of the 20th century. She describes the suburban boom of the 20th century and the role of the federal government in encouraging and financing it, both before and after World War II. She criticizes the suburban single-family home for its social isolation, lack of diversity (both in amenities and in racial/ethnic composition), and for denying the “natural human tendencies to build dense, diverse communities” (p. 59). She brings the story into the 21st century with the impact of the Great Recession on housing markets, the changing lifestyle of millennials, and attempts to preserve housing affordability.

The second section examines four “new ways of living.” The first is co-living arrangements, in which the private space is often quite small (usually sharing kitchen space), but providing common space for amenities. Such cost-saving through efficiency could potentially provide housing for all incomes, not just “savvy young people” (p. 88). The second way is via the tiny house movement and downsized housing expectations. She devotes much of the chapter to municipal limitations on manufactured housing and accessory dwelling units (ADUs), which restrict tiny homes on existing properties, raising unnecessary barriers to affordable housing. The third way, duplex and triplex buildings, addresses the needs of diverse households at different stages of their life cycle by enabling family members to live with each other while living independently. Such arrangements can facilitate cross-generational accumulation of wealth and minimize child care and senior health care expenses. The fourth is neighborhood-oriented healthy living partnerships, including the provision of health care, food and other services, and recreational amenities all within a safe, walkable distance.

The final chapter is devoted to proposals for enabling such housing. She examines three key issues: “transition … policies away from homeownership and single-family homes,” “subsidize people, rather than their property,” and “regulate landlords and buyers who own hundreds of properties or more” (p. 211).

Lind promises more than she can deliver. Her story of the history of American housing is incomplete. She extols the dense living of the New England village, while ignoring the hold of the frontier and Jefferson’s yeoman farmer on the American dream. She states in the first paragraph of the first chapter that “Most people lived in small cities where housing was located in walking distance to, if not directly above, commercial activity” (p. 23), but in 1790 rural dwellers outnumbered town and city dwellers by a ratio of more than 18:1 and rural residents continued to dominate until 1920 (U.S. Bureau of Census, 1975). As she tells the story, single-family homes became popular with Hoover’s “Own Your Own Home Campaign” after World War I. Unfortunately, she overlooks, for example, Vaux and Olmstead’s development of the planned suburban community of Riverside, Illinois, in 1869 and Beecher and Stowe (1869) “home as haven.”

Nor is her story of 21st century housing innovations complete. She presents co-living as if it were a new invention, apparently unaware of Melusina Fay Peirce’s “producer cooperatives” (1884), and she writes, “not until recently has a generation of American sought to live in more communal environments” (p. 88), apparently unaware of the hippie communes of the 1960s, or the 19th century American utopian experiments such as the Owenites (and the religious communes like the Shakers). She argues for ADUs in the backyard, apparently unaware that Dolores Hayden proposed this in Redesigning the American Dream (1984, p. 188), and oblivious that it was incorporated into the 1988 master plan of Kentlands, Maryland. When she talks about “housing that heals” and walkable cities, she does not mention the Congress for New Urbanism’s focus on traditional neighborhood development and transit-oriented design, incorporated into Seaside, Florida, and Kentlands, Maryland, in the 1980s. In building her argument for affordable housing, she does not refer to economic filtering in the housing market (a “traditional” source for affordable housing). In developing her argument against restrictive single-family zoning, she cites the adoption of the Minneapolis 2040 comprehensive plan, permitting triplexes on single-family lots as a matter of right, but she does not reference the intense community reaction against the plan.

These omissions are significant, not just for scholarly credibility, but for the story Lind wants to tell. All of her “new” home ideas have roots; they have been tried before, in different times and in different guises. And yet they have not established themselves as “traditional” the way the detached single-family home on its own lot has. The really instructive question going forward is why similar past efforts failed to take hold.

Still, this is a book worth reading, more for the questions it raises than the answers it supplies. It is useful for people interested in housing (policy, planning, development) to hear the new names and the “new” initiatives being created (even if it is old wine). But balance it with a deeper dive into its precursors, perhaps with Dolores Hayden’s Redesigning the American Dream (1984) and The Grand Domestic Revolution (1981), in order to learn from the past as well as the present.