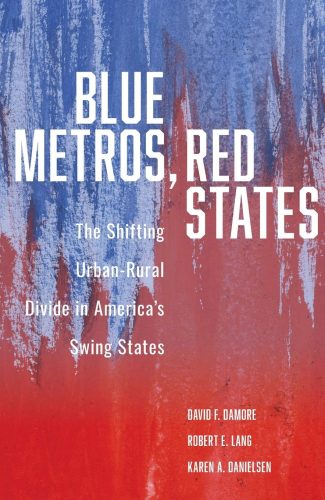 In the wake of the protracted presidential election of 2020, many of us can name the urbanized counties in swing states from Arizona to Pennsylvania. This timely study examines the 13 swing states that contain at least one metropolis with a population over 1 million. Accounting for over 40% of national population, these 13 states defy the blue state/red state dichotomy. To understand each state’s politics, Damore and colleagues explore election results, demographic trends, historical and cultural factors, and governmental structure, concluding with interviews with local political experts. The analysis is clear and well written (although not well copyedited). It will benefit both academics and practitioners and is suitable for courses in electoral and legislative politics.

In place of the red state/blue state divide, the authors argue that partisan divisions run straight through the suburbs of major metros. Denser and more diverse suburbs, close to big metros, tend to vote Democratic, while more distant, less dense and less diverse suburbs tend to vote Republican. An interest in light rail and mixed-use development, as opposed to “automobility” and the single-family residence, also tracks the divide. So does the perceived need for community engagement and active government versus a focus on individual freedom and a suspicion of government.

The legislative initiatives of blue metros are often frustrated by rural voters and their representatives in state legislatures, where rural districts tend to be over-represented. Blue metros face opposition on such legislative issues as gun safety, minimum wage, anti-discrimination, ride and home sharing, municipal broadband, tax-expenditure limitations, as well as plastic bag usage, nutrition, zoning, and rent control. The belief that metro Democrats ignore the concerns of rural voters energizes the opposition, while diversifying populations in blue metros inflame concerns about the declining status of rural Whites.

These patterns of diversity shape election results. Drawing on research into the “racial threat hypothesis,” the authors found a negative correlation between a swing state’s Black population and White votes for Hillary Clinton in 2016, especially in southern states where the Black population spread into smaller cities and rural areas. Where “Blacks are positioned to be politically powerful,” the authors write, “whites will more aggressively seek to maintain political control” (p. 43). Immigrants tend not to produce the same reactions. In states where there is greater diversity within diversity, Clinton improved her performance, while Donald Trump did less well, among White voters.

A Deep South versus Yankeedom tension still shapes interpersonal relationships, customs, institutions, and visions of freedom. But the tension is less tied to geography than to density and diversity. The southern viewpoint now infuses the rural North and West and the northern viewpoint dominates big metros in the South and West. Density and diversity exert an independent force on opinion through socialization. Big cities become more liberal because their citizens operate in dense and diverse settings that presumably reduce bias and encourage social integration.

Density and diversity thus contribute to political polarization. But the authors cite studies that argue that polarization is exaggerated and concentrated among activists. Polarization is top down, directed by party elites and donors, reinforced by partisan-oriented news media, and is focused more on emotional matters than issues and ideologies. Combined with electoral practices (redistricting, primary elections), small shifts in the opinions of politically active citizens nevertheless produce large differences in outcomes. Where cultural, racial, and other social issues dominate, White identity politics comes to the fore. While noting that polarization moves in tandem with economic inequality, the authors trace White identity to policies that appear to “threaten the status whites maintain at the top of the country’s racial hierarchy” (p. 55).

Governmental structures also exert pressures in favor of certain outcomes. Republican presidential candidates have won the popular vote just once since 1988 but won the Electoral College three times. Fewer than 2 million people living in the Dakotas elect four senators, the same number as 50 million people in California and New York. Even as the urban population grows, redistricting weakens urban constituencies in the House (and in state legislatures). Federal policies then transfer wealth from blue states and metros to red states and rural areas, despite Republican opposition to federal spending.

The authors argue that in 2016 the Democrats got caught between a crumbling blue wall in the Rust Belt and a rising blue wall in the Sun Belt. The major metros of the Midwest are not large enough nor diverse enough to counter smaller cities and rural areas. They also lack sufficient numbers of college-educated Whites to counter Republican strength among non-college-educated Whites. But diverse, urbanizing suburbs are growing in the Sun Belt, often eclipsing the size of declining Rust Belt cities. Rust Belt representation in Congress (and the Electoral College) will continue to drop after 2021 reapportionment, while across the Sun Belt, Arizona, Colorado, Florida, Georgia, Nevada, North Carolina, and Texas will gain representation.

Blue Cities, Red States suggests that a political situation where economically declining places dictate policy to economically dynamic areas is about to change. Major metros, in swing and blue states, generate most of the nation’s gross domestic product and foreign trade, as well as the vast majority of patents and new technology. But they do not exercise commensurate political power. The analysis here suggests that the electoral might of blue metros in swing states will soon put metropolitan leaders in control of national policy.

For all its virtues, Blue Metros, Red States is written from a metropolitan perspective that may help to explain and perpetuate our political divisions. In 2016, Clinton carried only 16% of counties, but those counties generated two thirds of U.S. GDP. The median income of Democratic districts in the House of Representatives is $8,000 greater than in Republican districts and the trend is toward greater divergence. Despite this evidence of economic inequality, the authors neglect to ask if blue metros have anything to offer rural areas or, indeed, if major metros bear any responsibility for the plight of rural areas. They note that density facilitates economic growth and that high-skill workers are concentrated in million-plus metros. But they seem less interested in the policy decisions and investments that concentrate opportunity in metropolitan areas.

The question of how blue metros relate to rural voters and rural areas is, as Blue Metros, Red States rightly shows, a crucial question for the future. The authors briefly address climate change, for example, arguing that blue metros are aggressively moving toward renewable energy while red districts make little effort. But the authors do not consider the role that agricultural and mining economies must play in a comprehensive response to climate change. Metro politicians who offer a vision and a set of policies that can attract even a small number of rural voters can dramatically change the electoral map. More important, they can begin to address the divides that so trouble us now.