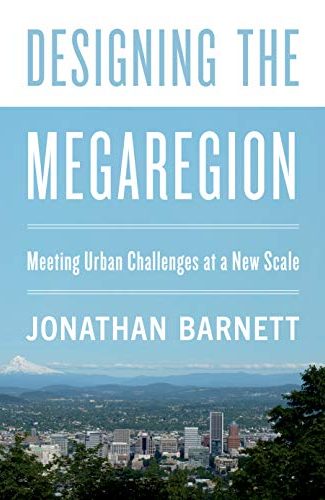 More than a century has passed since Patrick Geddes coined the term conurbation recognizing the potential for polycentric-urbanized areas. Jean Gottman later observed the formation of a “Megalopolis” or integration of eastern seaboard cities. However, as extended urbanized areas grew, environmental degradation, climate change, and social iniquity became unanticipated consequences. These outcomes transcend local planning and traditional approaches. In his book, Jonathan Barnett provides a regional perspective that addresses these issues.

Barnett opens his work by stressing that much growth is projected to take place in megaregions. Megaregions extend urban areas into urban patterns spread along highway corridors. Intervals of open country become smaller as new development expands at the urban edge to meet advancing suburbs. New clusters of offices and shopping malls have formed as large as a traditional town. According to Barnett, commuting patterns reflect growth spurred by profitable land transactions and homeowner incentives of property tax and mortgage interest deductions.

Barnett argues that planning and urban design have not kept pace with the need to manage growth on the edge of urban cities or to restore the economic health of older areas. Missing in urban development is regional design that manages how new development will fit into its environmental setting.

The book promotes planning at the level of an ecoregion. The technological advancement of geographic information systems (GIS) makes it possible to plan within an environmental context by mapping resource areas and natural boundaries where the type, quality, and quantity of environmental resources are generally similar. This level of analysis is critical; as expanding development takes over the surrounding natural environment, it can potentially alter and tip the ecological balance leading to floods, droughts, heat waves, and river and coastal flooding. To Barnett, environmental review at the development project level should be extended to a regional scale where the environmental context and off-site impacts can be evaluated.

Megaregions also experience congestion. Adding or widening lanes are not effective and traffic-inducing. As a solution, Barnett promotes a more balanced transportation system, using the Northeast region as a prototype. Metropolitan areas in this region have well-established highway, passenger and freight networks with dominant cities offering commuter rail to the suburbs and rail rapid transit to the central core. System operation could be enhanced with fast-enough trains and bus rapid transit (BRT) connection to transit hubs and transit-oriented development (TODs). A balanced transportation system can also organize development within the megaregion boundaries. Fast-enough trains and transit systems with their own rights-of-way can facilitate development in suitable parts of the megaregion; this includes channeling growth into bypassed areas in older urban centers and along commercial corridors where land use has changed due to e-retail.

Barnett next focuses on inequities within the megaregion. He presents the traditional case on how discrimination in real estate market and practices such as redlining and restrictive covenants, have locked African Americans into areas with poor public services, unemployment, and high crime. In addition, gentrification of older inner-city areas has double-edged outcomes: Benefits accrue to a city’s economy and property owners, but gentrification displaces low-income tenants who lack alternatives and relocate to worse neighborhoods. He also notes that housing affordability is driving sprawl and longer commutes, as affordable housing is located further away from the urban core.

The book next provides governance strategies for addressing megaregions. The multiple jurisdictional boundaries of these institutions may have to be consolidated. Building a transportation system in this manner can pull together all the components of a large urban area. Metropolitan Planning Organizations (MPOs) already conduct transportation planning. In the future, these organizations can form alliances to implement planning at a megaregional scale. Barnett also advocates for interstate compacts for rail, water, and highway transportation such as the Port Authority of New York and New Jersey. The Midwest Interstate Passenger Rail compact can also serve as a prototype for other agreements. Driven by suitability analysis, a planning agency could coordinate urban growth boundaries (UGBs) with an interstate compact. Barnett correctly recognizes that regional governance strategies will require that local authorities cede authority; this will take time.

Barnett closes the book with suggestions for revising local land use regulations. Regional policies would be implemented through development regulations written and administered by local government. Outdated zoning and subdivision regulations that do not relate well to changes in population and to changing real estate markets, and telecommunication and transportation networks, need to be revised or eliminated. Mixing lot size within a zones should become commonplace because this makes it easier to lay out a subdivision without destructive stripping of vegetation and regrading. This also reduces the amount of funds spent on streets and other infrastructure.

The strength of the book lies in its emphasis on regional planning and the environmental context, examples of regional governance, and latest innovations in transportation and land use planning. It effectively places climate change at center stage. Barnett also provides convincing statistics on population trends and the state of the environment that support planning for megaregions. He also offers a plethora of cutting-edge mitigation strategies which include a balanced transportation system. Further, the book is well-written and relatively jargon-free, which makes it a useful resource for planners, elected officials, and citizens.

I do have some concerns, however. First, Barnett failed to provide a definition of a megaregion and to compare this concept with related ones, e.g., “boomburbs” and “edge cities.” He could also have buttressed his discussion of ecoregions by discussing related concepts drawn from human ecology, bioregionalism, and transect planning. Second, while monochrome graphics keep the price of the book down, a reduction in printing costs comes with a reduction in clarity. Some photographs and maps are barely discernible. Third, the book should have included a more balanced discussion of mitigation strategies. For example, cities as Portland, Oregon, that use UGBs also experience traffic congestion. Barnett should also have given more attention to the role of buses in transit systems. In comparison to rail systems, bus routes are ubiquitous and better serve the needs of the disadvantaged. Fourth, while it is true that the growth of megaregions reflects profitable land transactions, it is also about greater efficiency. Subcenters reflect principles of agglomeration and bid-rent. Barnett’s discussion of congestion mitigation should have included strategies that do not require a major investment in transportation infrastructure such as congestion pricing. Finally, Barnett unfortunately overlooks constitutional challenges. Recorded subdivisions provide landowners with a vested right to build. Owners may construe down zoning or the extinguishing of development rights as a taking and litigate government to pay just compensation.

In closing, Barnett has provided invaluable insights into a regional form of planning that does not receive as much attention in the literature as it deserves. Further, with the book’s focus on the environmental context, it addresses other contemporary planning issues like climate change. Barnett persuaded me that environmental mitigation and enhancement and regional coordination are imperative. I hope this will book will not only encourage further discussion and research but ultimately influence urban and regional policy.