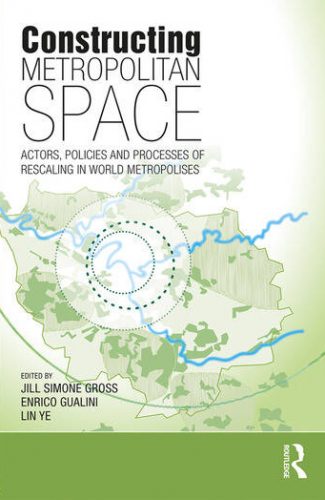 Neoliberalism has completely reshaped our cities and their governance, both in the global north and south. With upward and downward forces, we have been presented a new scalar pattern where the significance of the nation scale is decreased while regions at supra- and sub-national levels become more critical. In this process, cities and their governance are influenced together by global forces and increasing local/regional autonomy. Geographically, the emergence of political and economic issues beyond the city scale/boundary induces more attention paid to metropolitan development and governance. This is the context for this book, where the authors investigate cases from eight “metropolitan” areas in both the global south and north.

Instead of delving into the geographical inquiry of scale theories per se, this book shifts the focus to the policy processes that are at the core of urban politics and governance yet “require political action beyond the urban scale” (p. 214). The contributors make it clear that the metropolitan region/scale is not a consolidated policy object. Instead, it is a dynamic and ongoing arena that enables contestations and cooperation at both institutional and strategic fronts. By utilizing theoretical resources from geography and related disciplines, this book highlights the spatial dimensions and dynamics of urban policies that can be used for more in-depth analyses of the overall policy process (see below).

The book adopts a “problematizing” approach that does not take the metropolitan scale as an a priori political entity. It is the process through which such a scale is being constructed or contested that is worth more reflections. The book makes two critical contributions to our understanding of urban and metropolitan governance. First, this spatial problematizing forces us to look into what is going on empirically, instead of following “the normative assumptions of ‘public choice’ and reform-oriented ‘metropolitan consolidation’ models” (p. 4). In this way, we are better equipped to examine the concrete mechanisms through which the metropolitan scale, as a policy project, is actually constitutive in the making and shaping of those policies. Second, this book also offers a set of empirically grounded reflections on the nature of scales. In contrast to a hierarchical view that we often rely on (i.e., national-regional-urban), this book reminds us to attend more to the relational nature of scales, where economic choices and strategic concerns play crucial roles in consolidating political processes and outcomes that might induce a scale. The scale, in this sense, is better conceptualized as “the emergence and contingent stability of new spatial configurations of governance and regulation” (p. 11). From this view, the metropolitan scale is in many cases being contested and not yet “material” as we would imagine. To facilitate the empirical analyses, this book takes an approach of what it labels “heuristic analysis,” where the focus is put on “the way materiality is subsumed in discursive practices” (p. 15).

The eight cases are organized in an alphabetical way in the main body of the book. Together they constitute a globally comparative analysis of the construction of metropolitan scales. They all put their focus on the ways in which the metropolitan regions at issue have been rendered into policy spaces—with what institutional, organizational, or discursive actions and from/between whom. In particular, the empirical analyses are by and large developed with three keywords: the role of the state, the role of big firms and the actually-existing rescaling dynamics. In Berlin (Chapter 2), for example, it turns out that its historical and institutional conditions prevent a territorial merger at the metropolitan scale; but at the same time, “a range of flexible and ad-hoc modes of inter-institutional cooperation” (p. 52) has been enabled regionally. Delhi witnesses a similar pattern where the political rescaling is absent in the process of spatial rescaling (Chapter 3). While certain policies in transportation and industrial zones do contribute to the integration of metropolitan space and economy, there is however no “parallel construction of a political entity” (p. 83). This is further echoed by the experiences of New York (Chapter 5), where a historical analysis of several inter-state transportation projects (from the birth of the Port Authority of New York and New Jersey in the early 20th century to its recent failure in developing the Access to the Region’s Core project, among other cases) recognizes that “regional scale governance may be happening (functionally and discursively) albeit in the absence of institutional or structural rescaling” (p. 109).

While the metropolitan region is mainly discursive in New York or Delhi, it plays a more concrete role in Istanbul and Paris. In Istanbul (Chapter 4), neoliberal concerns of improving international competitiveness have been translated into local practices of “New Public Management principles.” In line with such principles, partnership-based developmental initiatives are consistently promoted by the metropolitan government—yet they are mostly rent-oriented. In Paris (Chapter 6), on the other hand, the metropolitan scale has long been a focal point of national and local political struggles. Globalization and decentralization turn out to be two main forces that are shaping local political arenas. Together with a series of local and national elections, these forces have become fundamental in driving certain players to produce diverse visions of the metropolitan scale. The consistent contestations among the central state, the regional authority, the municipality, the local authorities, and business associations in turn have led to the failure in building up a territorial leadership at the metropolitan level. These two forces of globalization and decentralization are also critical in producing the extended metropolis in Shenzhen (Chapter 9), where the local state (i.e., the Shenzhen municipal government) has taken advantage of centrally orchestrated policy frameworks at the national level and has formulated its own spatial policies to accommodate the role as a growing “world factory.” The private sector, especially tech giants, also plays a significant role in stimulating this process of outward expansion. But the metropolitan scale again retreats into the discursive arena in both Rio de Janeiro (Chapter 7) and Rome (Chapter 8), though for very different reasons. Entrepreneurial governance becomes the predominant policy framework in Rio, which strategically highlights the municipality of Rio while sidelining the metropolitan issue in the agenda of public policies (p. 152). In a different vein, the local economic structure and the strong municipal power can partly explain why metropolitan rescaling is rendered impossible in/beyond Rome.

This book presents an insightful analytical framework together with a rich set of empirical case studies on metropolitan/regional scales. Moving back and forth between the local mechanisms and global forces, the book shows vividly how and how far the changing global and local political economy have been spatially manifested through new configurations of governance and regulation, where both the (central and local) state and the private sector have their own, and often contested, roles. While the re-conceptualization of scale and the collective activity of variation-findings in comparative studies are just kicked off, and there are still more works to be done to further develop these lines of inquiry, this book is in general a timely interrogation on the actually-existing process of producing metropolitan space/scale. It is an informative reading not just for urban geographers and planners, but also for political scientists, economists, public policy researchers, and other social scientists who are interested in the interplay between space and politics. Besides experts, this book is also suitable as reading materials for courses on urban politics, urban geography, urban planning, and urban political economy.