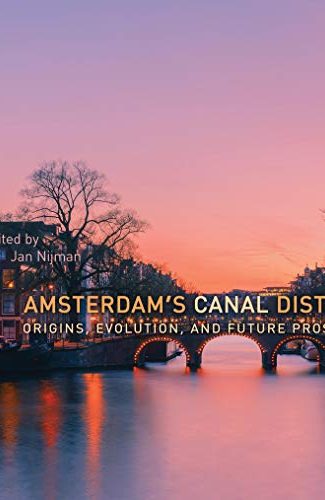 The Amsterdam Canal District, edited by Jan Nijman, makes an important contribution to the historic preservation literature and, more generally, to writings on global cities. Whereas most books on the Canal District focus on its creation in Netherland’s Golden Age (the 17th century), this book, which brings together top-flight scholars from a wide variety of fields, highlights both lessons to be derived from the district’s evolution since the 17th century as well as contemporary debates in Amsterdam about how to cope with the challenges posed by over-tourism. Planners in other European cities suffering from “touristification,” such as Venice, Barcelona, and Porto, will benefit from this richly illustrated and highly readable book, as will lay readers.

The book is divided into three sections, “Historic Origins,” “Evolution,” and “Twenty-First Century Challenges.” After an introductory chapter by Jan Nijman, Jaap Evert Abrahamse describes Amsterdam’s early expansion as a response to rapid population growth. Government decisions in 1610, 1662, and 1663 created three canals circling the medieval core as well as plots for luxurious canal houses; the Canal District that people love today would not have been possible without a top-down authoritarian land expropriation policy. Russell Shorto takes us on an imaginary journey by a 17th century merchant from his home on the Prinsengracht to the East Indies and back. This technique allows Shorto to convey the lifestyle of these wealthy merchants and why they were so strongly attached to the area. Through an analysis of letters from fourteen Canal District merchants, Herman van der Wusten gives us a feel for what members of the wealthy class were like. They played a dual role in Dutch society—both as leaders of the Dutch East India Company and as representatives in the parliament of the republic.

Jan Hein Furnée and Clé Lesger show that between the early 17th and 20th centuries the Canal District attracted Amsterdam’s wealthiest citizens; however, the social composition of the Canal District was more heterogeneous than is generally thought. GIS research on residents and the social clubs and cultural associations located in the area shows that the associations “both affirmed and bridged socio-economic differences in the Canal District” (p. 99). In contrast to what is often thought, the Canal District is not a static display of 17th century Dutch design, but it has been continually changing. The architectural history of the district can be read through the building facades. Freek Schmidt warns against the restoration of buildings to their original state or of excluding all new designs. “If this connection between modern-day use of buildings of the Canal District and everyday life in the city is lost, this artifact will lose its essential dynamics and become nothing more than a museum piece in a worldwide collection” (p. 117).

Len de Klerk shows how urban planning first threatened to destroy the beauty of the Canal District, but then helped to save it. During the post-WWII rebuilding period (1945–1970), the response to increased congestion was to create more room for traffic and car parks. Citizen protests culminating in the Nieuwmarkt Riots in 1975 helped to save the inner city. In 1988, the city council designated the entire inner-city medieval core and Canal District as a conservation area and in 2010, UNESCO named the Canal District a World Heritage site. Containing about one fifth of Amsterdam’s total employment, the inner city is currently a major economic location. The authorities want to keep it that way and reject the “Venice option”: “an open-air museum is not wanted … but balancing between historical and economic values is not an easy task” (p. 139). Milisa Pesoa, Mark Warren, and Joaquin Sabaté’s comparative case study analysis of Amsterdam and Barcelona shows that the goals of physical renewal and economic development are not necessarily incompatible—they can coalesce to transform historic core areas. However, the two cities have followed different trajectories. Amsterdam’s inner city, including the Canal District, developed over centuries with an awareness of its esthetic value; a high proportion of its buildings have been preserved or restored. In contrast, Barcelona’s old town core—Ciutat Vella—that contains the Gothic Quarter was preserved not because it was protected but rather because it was ignored. Robert Kloosterman and Karin Pfeffer further develop this theme—the Canal District as an economic generator, noting that the district is anything but an open-air museum. It is still the location of a varied set of knowledge- and transaction-intensive activities, many of them linked to Amsterdam’s role as a second-tier global city. “As in the 17th century, the economic activities of the Amsterdam Canal District with its compactness and proximity offers a cosmopolitan urban milieu that fosters easy face-to-face exchanges and related networking—crucial for small firms—while digital technologies and a modern transport infrastructure enable intensive contacts with other parts of the world” (p. 179).

Although there have been initiatives to link the slave trade to wealthy merchant canal house owners, tourists and Amsterdammers visiting the Canal District rarely are presented with the Netherlands’ colonialist past. In Amsterdam, the Canal District and the urban extensions that surround it (with housing projects with names like the “Indies neighborhood” or “Transvaal”) were enmeshed with the development of European imperialism. Susan Legêne and Tessa Ver Loren van Themaat recommend a new imperial cities narrative. Building upon existing initiatives like the Black Heritage Amsterdam Tour they recommend a new tourist tour concept linking Amsterdam to other cities of Europe’s colonial past including Liverpool, Bristol, Rotterdam and other major ports and emigration points.

Over-tourism has led long-term residents of the Canal District to have an ambivalent attitude toward their residential environment. According to interviews conducted by Willem Boterman and Fenne Pinkster, residents feel lucky to live in such a beautiful place, but feel that tourism is undercutting their quality of life. They complain about “staged” authenticity like beer bikes, the loss of neighborhood commercial establishments like bakeries, and the growing number of short-term rentals (e.g., Airbnbs) that leave long-term residents with a sense of estrangement and alienation. The municipal government has implemented, or is considering, a ban on beer bikes and other forms of this staged authenticity, a strict enforcement against inappropriate public behavior (red-light district stag parties, etc.), a “dispersion policy” to distribute tourists across the city, and limits on short-term rentals. Whether they will succeed remains to be seen. European and American cities attuned to the tension between preservation and economic development should stay tuned.

This book is of immense value for showing the interconnections between such diverse fields as architecture, art history, urban planning, geography, economics, philosophy, sociology, government—and even GIS, I will use it the next time I teach a course dealing with Amsterdam.