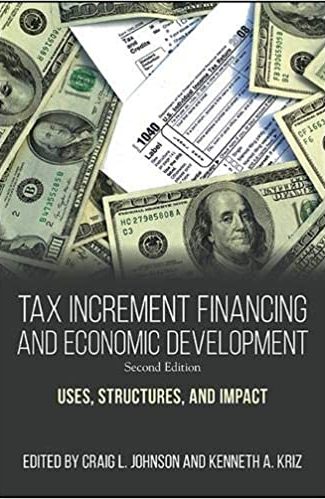 Tax incentives and subsidies consistently account for the bulk of public resources spent on local economic development to attract businesses to a city or state. In this second edition of Tax Increment Financing and Economic Development, editors Craig L. Johnson and Kenneth A. Kriz document and analyze the evolution of one of the most popular economic development tools used by local governments in the United States. Tax increment financing (TIF) adoption establishes a geographic area for which debt instruments are issued to finance public improvements that will presumably foster (re)development. This usually occurs through the installation of physical infrastructure and these improvements are expected to generate enough new private investment that the anticipated increase in property tax revenues can be used to repay the debt.

While the literature on TIF is robust and the “essence of the TIF policy imperative has remained the same” (p. 3), the prevalent, widespread use of this development tool has spawned significant modifications to TIF policy and practice in the 2 decades since the book’s first edition. This edited volume explains how TIF generally operates, considers its limitations, and illustrates how TIF has been amended and refashioned to address those limitations. Effectively employing current TIF policies, practices, and case studies as springboards for analysis and discussion, the text offers recommendations through a lessons-learned approach.

The book is divided into three parts. Part I, “Background,” grounds the reader in the broader economic development landscape and provides an overview of TIF in the United States within that context. This section explains what TIF is, how it generally works, and carefully summarizes the benefits and challenges to TIF, including its popularity and flexibility, its potential for misuse and abuse, and the impacts of TIF on overlapping jurisdictions. Johnson and Kriz review state TIF laws and document their evolution and subsequent changes. While initially structured as an urban redevelopment tool for blighted areas, TIF districts have increasingly been adopted to finance development in suburban locales and greenfields. Another more recent trend, the rise of accountability-based restrictions, is noted. Aggregate TIF debt finance characteristics over the 2000 to 2016 period are discussed; that is, annual issuance volume, bond type, issue purpose, security structures, issue purpose, use of financial intermediaries, method of sale, and bond structures. The authors provide a useful analysis of the risks of TIF debt from both taxpayer and bondholder perspectives.

Part II, “Implementation, Uses, and Structure,” presents a mix of project case studies that demonstrate the range of TIF programs. The case studies cover TIF processes, stakeholders, and the subsequent formation of partnerships. Johnson and Kriz review high profile projects like Port Covington redevelopment in Baltimore and Stapleton Airport redevelopment in Denver. TIF has long been lauded for its flexibility in the broader constellation of local economic development tools. Case studies of the evolving nature of TIF in Chicago and California reinforce and extend this notion. This section also explores the use of TIF in rural Nebraska, where state TIF statutes are especially vague. Legislative and administrative best practices to facilitate brownfield redevelopment through TIF are discussed, as are issues and best practices for one of the most powerful innovations on the economic development scene in recent years, the rise of the state “super TIF,” where “such programs dedicate certain project-generated state revenues in the same manner that local government TIF projects use project-derived property taxes to support the project” (p. 223).

Part III, “Economic, Social, and Fiscal Impact,” considers the theoretical basis of TIF and presents the characteristics of a strong TIF model. The bulk of this section comprises empirical analyses of TIF-related issues that have long been deemed divisive or problematic, such as spatial spillovers. While some states prevent or allow school districts to opt out of participating in the TIF process, other states require school districts to participate. The book provides recommendations to lessen the potential negative affects TIF might have on these districts. A case study about groundwater contamination in Wichita, Kansas, where the lines between flexibility, creativity, and ambiguity blur, explores how city officials crafted a new form of TIF statute. A summary of the evolution of TIF legislation in Indiana illustrates the capacity of state legislatures to effectively respond to public concerns about TIF and amend and adapt TIF policy accordingly.

In their conclusion, Johnson and Kriz underscore the increasingly encompassing and ever-evolving nature of TIF, while acknowledging that “whether this evolution is for the better can be debated” (p. 332). They suggest restructuring or amending TIF legislation in some contexts to deal with the changing nature of local fiscal stress. While Johnson and Kriz find a significant increase in accountability-based restrictions across states, they voice concern regarding transparency and accountability. Few states compel systematic assessment of the effects of TIF. While this is largely unsurprising, as the editors point out, “TIF is a process for allocating public resources, not just a redevelopment technique” (p. 332). This suggests that while TIF practices are evolving to meet the changing needs of state and local governments, its recognition as a conduit for broader redevelopment processes has yet to be fully realized.

It has been 20 years since the publication of the first edition and this updated volume makes a significant contribution to the literature. This edition is especially adept at demonstrating how the concept of TIF has been expanded through policy and practice. While the value of the text lies in its scope, breadth and analysis, it also serves as a benchmark, a point of reference, and ultimately, a roadmap. The book is useful for state and local officials, economic development practitioners and municipal planners to craft, implement, and amend TIF policies and programs. Academic researchers and instructors will also find the book to be of interest and it would serve as a suitable supplement to any economic development or urban redevelopment course. Another strength of the text lies in its multidisciplinary approach. The contributors have expertise and training in political science, public administration, policy analysis, urban planning, economics, and sociology.

Overall, the text emphasizes that TIF is simultaneously enduring and adaptable. It is the go-to text for anyone wanting to learn the basics about one of the most popular economic development tools of our time.