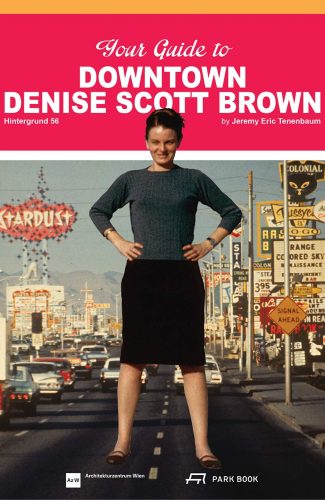 The book is organized into five chapters. The first chapter “Your Quick Guide” is an overview of the exhibit, complete with plan drawing, and very handily provides several itineraries to view the exhibit based on a visitor’s level of interest and available time. Since the exhibit is organized thematically, I was especially glad to see an itinerary arranged in chronological order.

The second chapter, “Welcome Downtown” provides much needed context to the exhibit. I found the five-page chronology of Scott Brown’s life and work very helpful. She was born in 1931 to British ex-pats in Zambia and at age 2 moved to Johannesburg, South Africa. She moved to England in 1952 where she practiced architecture and then moved to United States in 1958 where she attended the University of Pennsylvania and studied city planning. She attended the lectures of Ian McHarg on environmental planning and was mentored by Paul Davidoff on social activism. She then relocated to the west coast to teach for two years and this is when she explored and photographed Las Vegas for the first time. In 1967, she married Robert Venturi and then returned to Philadelphia to join the firm of Venturi and Rauch. The balance of the chapter describes the process of creating the exhibit. Angelika Fitz, museum director, states that “one of my main goals was to increase the presence of women architects. I don’t think it takes much explanation at this juncture about how urgent this is in a discipline that is even more dominated by male stars than art” (p. 35). Jeremy Tenenbaum, a colleague of 19 years at Venturi Scott Brown and Associates, and the lead exhibit designer and coauthor of the book, describes the importance of storytelling to Scott Brown as a way to teach students and to explore design and planning ideas.

The third and longest chapter, “Up and Down Downtown” describes the content of the exhibit in detail. The exhibit space is cleverly organized as an imaginary block in downtown Vienna, with the many different themes of the exhibit featured as urban “storefronts.” The book documents the “storefront exhibits” and provides the text and many of the photographs of the exhibit. As an urban planner, I found five of the themes of special interest. In “From Las Vegas Back Again to Rome” Scott Brown uses photography as “an important tool for understanding, teaching, and designing” (p. 52). The section includes four pages of photographs of Africa, Las Vegas, and the west and the east coasts of the United States. In “Eyes That Do Not See” she discusses the importance of central place theory and natural structures and pattern. She summarizes central place theory as “it’s where the most people want to be” (p. 66). She looks at the physical structures and patterns in nature, such as crystals and fish skeletons, and extends those to urban forms and patterns. She states, “urban patterns form through the particular kind of system where the building block is a grid for good reasons and a marketplace is at the crossroads for good reasons, along with other important things like a cathedral and the ruler’s castle nearby” (p. 68).

In “Desire Lines” several of Scott Brown’s most significant planning projects are illustrated and discussed. The Crosstown Community Plan (1970) was created in reaction to a planned crosstown expressway that would have destroyed much of the low income African American neighborhood of Philadelphia. Photographs by Scott Brown of colorful storefronts clearly illustrate the vibrancy of the neighborhood that led to the preservation of the area. The Washington Avenue Plan (1978) was created to preserve the art deco hotel district of Miami Beach, Florida. She comments “we recommended how to conserve Deco but evolve, but critics called it the ‘Deco Scam,’ they thought it threatened their economy” (p. 84).

In “Jointkreativitat” (joint creativity), the process of collaboration is discussed. Scott Brown makes a good suggestion: “take a mixture of creative people from different backgrounds and put them around a table looking at a design and building on each other’s suggestions. I call that ping-pong, a ping-pong of ideas” (p. 100). In “A+ You” (architecture plus urbanism), she stresses the importance of combining both disciplines. Scott Brown notes “you have to think of urbanism as well as architecture, and then the ideas will come” (p. 108). Two projects illustrate this principle. Located on Trafalgar Square in London, the National Art Gallery’s Sainsbury Wing (1991) takes inspiration from the surrounding buildings by way of materials and by borrowing classical elements such as columns and cornice lines. The second project, located in Nikko, Japan, the Nikko Kirifuri Hotel and Spa (1997), takes lessons from Las Vegas. Scott Brown comments: “we made the lobby into a Japanese village street—in depiction, with store windows and signs and banners. These elements of the cultural landscape created a setting that was part Main Street, part museum, and part fairytale” (p. 112).

The fourth chapter, “DSB A to Z” contains three lists: people that had an impact on Scott Brown; places where she lived and studied; and a glossary of terms. The fifth and final chapter “Beyond Downtown” contains a list of useful websites, a short bibliography, and a list of projects to visit.

I found the thematic organization of the exhibit and book illuminating for understanding the ideas and theories used by Scott Brown in her work, but it makes the biographical and chronological aspects of her story more difficult to grasp. The several hundred photographs in the book demonstrate the power and impact of Scott Brown’s photography. The book is useful in graduate and undergraduate classes when discussing the impact of postmodernism on urban design, and sexism and other challenges facing professional women in the workplace.

Previous PostViews from the streets: The transformation of gangs and violence on Chicago’s South Side, by Roberto R. AspholmNext PostRace for profit: How banks and the real estate industry undermined black homeownership, by Keeanga-Yamahtta Taylor
0Shares
Book ReviewVolume 43: Issue 6 (2021)