Journal of Urban Affairs > Book Review > Views from the streets: The transformation of gangs and violence on Chicago’s South Side, by Roberto R. Aspholm 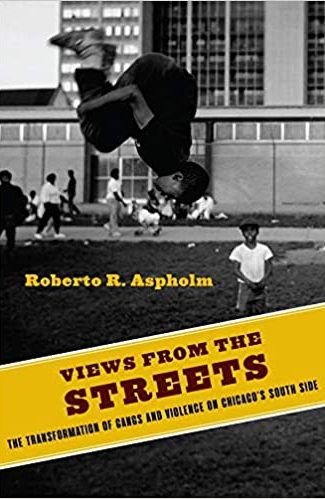 The role of gangs in the commission of crimes and generation of fear in Chicago, and the disintegrating construct of traditional corporate structures of gangs involved in the narcotics trade is the focus of Views from the Streets, by Roberto Aspholm (Southern Illinois University). Views differs from most previous examinations of the causes and cures of gang violence, in that it actually gives voice to gang members active in the drug trade and retributory inter-gang conflicts in Chicago. Aspholm interviews gang members for a view from the streets, eschewing for the most part the academic 50,000-foot view of this social problem.

The book’s many extensive accounts of gang life direct from the sources personalize the plight of these young men—and they are almost all men, young, and Black—where the risks of violence and the costs of avoiding or confronting competitors far outweigh the monetary rewards.

Aspholm details how gangs have splintered from the classic top-down organizations that some of the more infamous interstate gangs such as the Bloods and Crips established decades ago. Without the organizational loyalty of a larger group covering larger territories, the smaller groups—sometimes establishing drug sales zones of only a few blocks—find they have more enemies nearer to their homes than in years past, and few allies to keep them safe. “In short, today’s gangs are not stable, hierarchical organizations with identifiable leaders and clear lines of authority. Gang animosities are fractured and diffuse, and violence is often erratic and unpredictable” (p. 149). Even the current group of young gang members interviewed by Aspholm see this. “Clearly such [traditional gang] affiliations no longer function as the incontrovertible basis for association among Chicago gang members” (p. 55).

Aspholm waits to review efforts to curb gang violence until Chapter 5, “A Critical Appraisal of Violence Prevention Failures.” One such prevention effort involved “focused deterrence,” wherein the police identify the most prolific violent offenders with gang affiliation and meet directly with the leaders of that gang to lay down the law: Then department superintendent Jody Wies and federal prosecutors hosted a call-in at the Garfield Park Conservatory with purported gang leaders and delivered the deterrence message. In an apparent show of contempt for the message and/or messengers, the attendees got up and walked out. Based loosely on a successful “Boston Gun Project,” which saw reductions in violence for several years, Chicago contracted with the Cure Violence/Ceasefire organization to follow-up with individuals targeted for counseling and committed to a full-court press of enforcement including the use of federal RICO (Racketeer Influenced and Corrupt Organizations) Law. Aspholm doubts that it worked. “In the end, the failure of focused deterrence and Cure Violence to make a discernable impact on levels of violence in Chicago indicates that reducing gang violence is not as easy as the proponents of these models claim it to be—at least not in Chicago” (p. 167).

Reformed gang members are even recruited to turn the tide of violence, but several who spoke to Aspholm seem to shrug in ambivalence about their potential influence on the next generation. In a scene from The Interrupters, a documentary about the Cure Violence initiative: “They [young gang members] kept calling me: ‘Man, they shooting!’ I said, ‘What you want me to do? … I might get shot!” (p. 160).

There are rewards for practitioners who finish the book, or even only read Chapter 5. Law enforcement officials may espouse “Intelligence-Led Policing” but this has led to a lot of unsupportable analysis that gives the sheen of clear thinking to police strategies and tactics:

One additional component of the Chicago Police Department’s focused deterrence strategy that warrants brief discussion is its Strategic Subjects List (SSL), which the department initially compiled in 2012. The SSL is a sort of modernized version of a traditional gang database that uses an algorithm based on social network analysis and eight risk factors to create a “heat list” of individuals at high risk for being a victim or perpetrator of gun violence … “more than half of all black men in their twenties in Chicago are on the list, and nearly one-third of those listed have never even been arrested or shot.” (p. 152)

Aspholm is not above this practice of cheat-sheet analysis. He posts without qualification the “Woodlawn community gang territories and schools” map (p. 82) which leaves the impression of gang-staffed checkpoints, bollards and stanchions to control access to community members. While the Woodlawn map leaves about half of one school district unclaimed by any specific gang, it would be reasonable to conclude that in some areas you would only be safe walking down the middle of the street.

Perhaps the major sin is not in trying to develop algorithms to isolate the most at-risk gang members. We might ask instead: Has the Chicago Police Department neglected the basics of prevention and crime reduction that are possible through, simply put, well-managed policing? Aspholm could have looked outside Chicago for successful models. The New York City Police Department successfully continues the basics of its culture-changing COMPSTAT regime, reducing crime and providing “the most dramatic demonstration of policing strategy as an instrument of drug-related harm reduction in modern U.S. history” (Zimring, p. 193). Established in 1993, it’s credo of “put the cops on the dots” is still the most effective strategy adopted by the NYPD and many other agencies. “Criminologists have assumed that crime is ‘loosely coupled’ to place [yet] the extent of the concentration of crime at place is dramatic” (Weisburd et al., p. 9).

Chicago’s own CAPS (Chicago Alternative Policing Strategy) model actually sought both strategic, geographically applied police work with input from the community. “Beats,” segments within each precinct hold monthly meetings with the goal of narrowing down the list of problems to those that were manageable and strategies that were supported by the community most affected by them. Is CAPS still being implemented by the CPD? From Views, we cannot guess.

The concluding chapter contains smorgasbord of alternative intervention strategies are examined cursorily, but Aspholm does offer some cogent assessments of the challenges to researchers:

In one gang study, for example, gang members were asked, “What would be the best way to get rid of your gang?” When participants responded that all of their members would have to be killed to eliminate the gang, the researcher interpreted this as evidence of the centrality of violence to gang culture—that gang members were so engrossed in violence that they could not see beyond its narrow, lethal horizons. Apparently, he did not consider that participants may have been responding defiantly to a hostile question in which they and their friends were framed as something “to get rid of.” (p. 190)

At least that researcher, and Aspholm, deigned to ask.