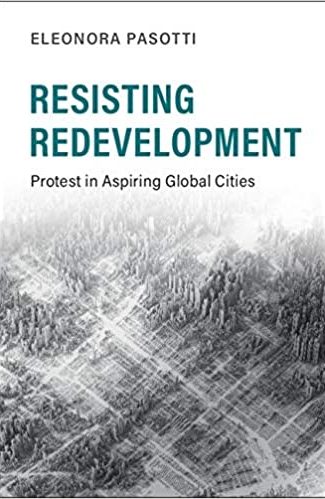 In Political Branding in Cities: The Decline of Machine Politics in Bogota, Naples and Chicago, Eleonara Pasotti argued that powerful modernizing mayors in three deindustrialized cities had redeveloped their cities by rebranding declining neighborhoods as global cultural sites, displacing the existing tenants in an effort to attract tourists, creative classes, and cultural producers. In the process they had transformed the relationship between citizens and local government from interpersonal client/patron exchange chains into a more impersonal and contentious forms of citizenship, “infused with emotional forms of identification” (Pasotti, 2010, p. 199).

Pasotti’s questions are largely those asked by urban studies scholars, but she draws more heavily on the social movement (SM) literature for answers. She also draws inductively from 10 years of mixed methods field research on 29 movements fighting displacement in these 10 aspiring global cities.

Pasotti postulates four conditions might be necessary for successful mobilization against displacement. The first two—legacy of protest against redevelopment and broad city-level networks of supporting groups and organization—are normally considered in tandem by SM studies showing that protest usually leaves a residue that includes experienced activists, organizations and networks. Pasotti, however, suggests that perhaps only one or the other is necessary. The third is strong unions or union support. The fourth is experiential tools. By this she means actions that are neither militant nor explicitly political, but rather appear hedonist and attractive to nonactivists, such as music and dance festivals, storytelling and memory workshops, communal meals, collaboration with local artists, tours and heritage site registries. It is this last factor, one mentioned but understudied, that Pasotti highlights as her original contribution. “These tools promoted emotional associations with the core values of the protest, thereby heightening participants commitment” (p. 137).

Even high levels of mobilization, Pasotti warns, are unlikely to be successful, unless they are combined with either (1) a council ally and a leftist local administration or (2) a council ally and leftist higher-level administration. Urban squatters also depend on favorable market structures. Coordinated markets (state planned or directed) and hierarchical markets (where, as in Latin America, the market is dominated by a small number of family-owned or controlled diversified business groups, or grupos economicos) are more favorable for urban squatters than free markets.

To sort her extensive data and identify statistically significant relationships, Pasotti uses fuzzy set qualitative comparative analysis and a digital tool called Qualitative Comparative Analysis (QCA) to analyze data from a relatively small number of cases and select “conditions that are insufficient by themselves but necessary components of causal combinations that are unnecessary (because of multiple paths) but sufficient for the outcome” (p. 337). She finds statistically significant relationships between mass mobilization and one of the three combinations of two postulated necessary conditions: (1) experiential tools and broad-activated networks, (2) experiential tools and protest legacy or (3) union support with activist networks.

Her most successful example is Yungay, Santiago, where inexperienced activists used experiential tools to halt the construction of new high rises, won landmark status for 113 hectares, “the largest area ever registered in Chile” (p. 4), and then continued, winning seats on city council, initiating popular elections for municipal institutions, creating a national league of neighborhood associations, changing national urban neighborhood policy, and ultimately winning landmark status for another 117 hectares—230 in all—after the socialist president returned to office. “The role of prior experience,” Pasotti argues, “emerges as far less influential than the existing scholarship would predict” (p. 41).

Yet the Chilean success was not replicated by other movements. Massive crowds, decampments and tent cities of thousands of residents were ultimately defeated in Tel Aviv (where protesters objected to the “white city” brand for its displacement of poorer and less White residents, and where ethnic divisions within and between Tel Aviv and Jaffa protestors ultimately led to its demise) and Gezi Park, Istanbul. The movement organized to protest the destruction of public housing in Toronto’s Regent Park was undermined by the “lack of preexisting networks and the legitimation of the redevelopment by cultural producers associated with the entrepreneurs” (p. 300). In contrast, Toronto’s Lawrence Heights residents won some modicum of success, when they used their institutional access to achieve on-site relocation instead of total displacement. Unions helped residents of a housing estate in Melbourne win support from council members, and a voice in the redevelopment plans. Protest legacies helped squatters in several cities but long-term success depended on market structure. The Boyle Heights (Los Angeles) anti-gentrification movement targeted artists and art galleries, but the outcome of that movement was not clear at the time of publication.

Two of the four anti-displacement movements in Seoul were successful. Both rejected Korea’s more counterproductive “militant legacy,” and instead, “conferred political influence on those best suited to devise powerful social experience—artists” (p. 251). In Durban, the city sold the property to a construction company that instead of reimbursing a popular restaurant owner for his investment, hired a shadow company of violent thugs, who trashed the restaurant and assaulted the owner, workers and even customers. The community occupied the restaurant grounds, and quickly organized a 2-day concert that drew 2,500 attendees. Even with massive citywide support, and an ally on city council, activists could not derail the government’s redevelopment project. Victory consisted of financial compensation for the restaurant owner who was allowed to rebuild close by.

The second successful Korean movement in Mullae Arts Village used “exceptionally dense networks,” and experiential tools to knit together a community of artists, residents and ironworkers (leading to a flowering of iron artwork). They derailed the government’s redevelopment project but ironically, their very success in highlighting the neighborhood’s warmth and artistic culture, attracted “the very consumption and gentrification dynamics that these tools were intended to impede” (p. 269).

The wins, then, were quite modest. Pasotti admits they were defensive and mobilized on a case by case basis. She recommends a series of more proactive measures ranging from community planning to land trusts. But given the singularity of Yungay’s much larger accomplishments and transformation of urban policy, something other than the factors Pasotti lists must be at play. Unfortunately, Pasotti’s theoretical framework is too constrictive to explain Yungay’s exceptionalism, which is likely the result of elements beyond her theory’s component parts.

Leaders in Yungay were too young to have participated in prior democratization struggles and were inexperienced. But prominent among the local organizations Pasotti lists in Yungay’s broad network are the Victor Jara Foundation (named for the tortured and executed Communist singer/songwriter), the University of Santiago (the site of an armed uprising at the time of the coup) and the Museum of Memory. Experienced political activists are active in all three and many of them deployed similar experiential tools—mural painting, storytelling, dance troupes (I danced in one), concerts, poetry and photography workshops, festivals celebrating the original land occupation and written neighborhood histories—during the dictatorship. Pasotti similarly underestimates spillover effects from prior democratization struggles in Korea. She vividly describes how violent thugs sparked moral outrage in Seoul, but fails to incorporate such emotional and relational dynamics into her theoretical model.

These quibbles aside, Pasotti’s book is an important addition to the literature on urban studies, urban social movements, and resistance in aspiring global, redeveloping and gentrifying cities and is certain to spark further interest in research on this critical contemporary issue.