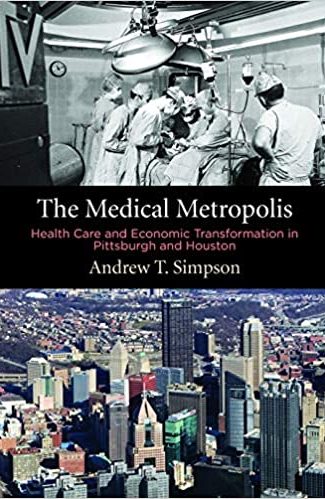 In The Medical Metropolis, Andrew T. Simpson tells the story of the United States’ march toward a market-focused health care system through the experiences of two iconic American cities. With detailed case studies, Simpson explains how Pittsburgh sought economic revitalization (following the decline of American steel) and Houston sought economic stabilization (amidst oil’s boom and bust cycles) through the business of health care.

Simpson chronicles how each city saw opportunities in the health care industry during the middle decades of the 20th century and continued to invest in and promote the industry through the beginning of the 21st century. Both cities believed that health care could bring steady middle- and upper-income employment to their regions. Initially, health care played a supporting role to existing industrial sectors. Simpson explains that hospitals and other health care facilities were viewed as “locational assets” during the first half of the 20th century. Civic leaders believed that Pittsburgh’s and Houston’s ability to offer premier health services was a boon to the cities’ industrialized economies, as good health care kept workers on the job. Based on this belief, the health care industry expanded rapidly through the cooperative efforts of large philanthropic donations, growth-oriented universities and hospital systems, and accommodating city governments. This included the advancement of large medical centers, such as the University of Pittsburgh Medical Center and the Texas Medical Center.

By the middle of the century, both cities realized that health care could play more than just a supporting role in their economies. Industry and civic leaders began to embrace a more market-oriented posture for the health care industry. Hospitals in both cities developed specialty service lines (such as treating livers in Pittsburgh and hearts in Houston) and actively recruited top medical talent and medical tourism. Yet as leaders sought an expanded role for the health care industry in the 1960s, there was also a call for the industry to expand its reach to all members of the community, consistent with the civil rights movement and War on Poverty. During this period, hospitals and other health care organizations made focused efforts to establish clinics and other services for the underserved. Simpson notes that these efforts were possible in part due to the availability of public funding and new approaches to health care delivery and payment systems. During this time, the health care industry’s footprint continued to spread throughout the city, but when funding sources disappeared, so did many of these community service efforts.

As the social justice efforts faded, the changing nature of health care financing during the 1970s and 1980s motivated these entities to adopt many for-profit strategies. Nonprofit hospitals and university systems had to compete with aggressive for-profit health care companies, navigate the growth and reimbursement changes of Medicare and Medicaid, and work with (and compete with) insurance companies and the pharmaceutical industry. Likewise, Pittsburgh and Houston’s focus spread beyond the hospital systems to biotech, insurance, and other facets of the health care industry. The nonprofit hospital systems adopted various strategies to compete in the health care marketplace, including buying up health care practices throughout their regions and creating spin-off for-profit businesses. With all of this expansion and competition, health care was firmly established as a primary economic driver in both cities by the turn of the millennium.

In telling these stories, Simpson demonstrates the impressive depth and breadth of his research. He not only chronicles the major developments in the health care industry in each city, he also peels back the curtain on the internal deliberations of the major players as they made strategic decisions. These details provide useful insights for those interested in nonprofit governance and public-private partnerships, particularly in the context of urban economic development. Likewise, these case studies chronicle how national trends in American health care throughout the 20th century affected local health care industries.

At several times in the book, Simpson references how the changing nature of the health care industry affected the people living in these two cities. While upper- and upper-middle-class residents and transplants in both cities had access to employment opportunities and high-level care in Houston and Pittsburgh, what of the residents on the margins? While Simpson noted the outreach efforts in the 1960s and acknowledged that the economics of health care are not evenly distributed, more needs to be understood about how this evolution affected lower-income residents and residents of color. Did the entry-level jobs at the growing hospitals provide opportunities to climb the socioeconomic ladder or did they fail to pay a living wage? Did any educational programs provide residents with a real chance to gain the skills necessary to find higher-wage jobs? Simpson’s in-depth account provides incredible detail regarding the perspectives of government and industry leaders as their cities became “medical metropolises.” For a more complete understanding of this story, research must now focus on revealing how American cities’ embrace of the health care sector during the 20th century affected the fortunes of working-class and marginalized city residents.